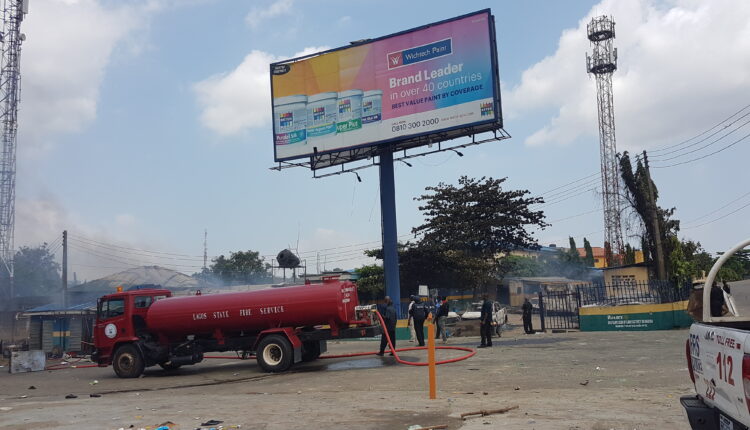 After several arsons and destruction of public infrastructures recorded yesterday in Lagos State, hoodlums on Thursday set another facility belonging to the Nigeria Police Force on fire in Ojodu Berger axis of Lagos State, destroying property worth several millions of naira.

No fewer than eight vehicles were destroyed in the inferno by the mob said to have been protesting police brutality and end to bad governance.

Also, several shops housed by the facilities were torched down by the hoodlums with goods running to million destroyed.

It was learnt that some of the goods were also looted by the irate youths who were said to have been planning the arson since Wednesday morning.

Our correspondence gathered that the attack was prevented yesterday after the division called for more back up and mounted a roadblock to wade off the hoodlums.

It was gathered that on Wednesday night and early hours of Thursday, the hoodlums converged at an uncompleted building behind the Amuf Filling Station in Grammer School Bus Stop where the police facility was situated and started attacking the station with bottles and stones.

An eyewitness said that the youths who numbered about 50 attacked the station around 12pm today, set the place ablaze after looting the shops beside the facility.

“They set the place ablaze not long ago. It was about 12 and 1 pm when they attacked the place and carted away goods in the shops before they were burnt down.

“They have been trying to burn the station since yesterday but all their efforts were met by strict resistance from the police who in spite of their activities remained calm and prevented confrontation that could lead to loss of lives,” the eyewitness who craved anonymity said.

When our correspondence arrived the incident scene about 1:30pm, the fire was till burning before the official of the Lagos State Fire Service arrived the venue and put out the inferno.

Meanwhile, the Ojodu Primary School, situated close to the police facility was also attacked and some section of the building set ablaze by the hoodlums while some valuables, including generators and electronic appliances were carted away.