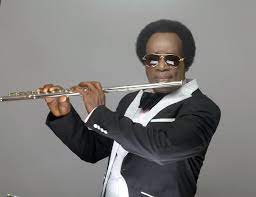 A high-life music maestro and sculpturist, Victor Uwaifo, has been reported to have passed on at the age of 80 after a brief illness in the country.

Uwaifo, who became popular across Nigeria and abroad over his brand of high-life music, was said to have died in Benin City, Edo State capital.

Speaking on death of the former Commissioner for Arts and Culture under the ex-governor, Lucky Igbinedion, the son of the late Icon, Uwaifo Peter de Rock, on Saturday, described his father’s demise as a rude shock to him.

While Peter did not disclose the cause of his late father’s death, who was Prof. of Visual Arts at the University of Benin (UNIBEN), expressed anguish at the passing on of the music star.

The young Uwaifo, who announced the demise through his official social media page, said “Daddy. Why Did you leave us now. Prof sir Victor UWAIFO has gone to rest. Black Saturday for me now”.

He further hinted that his father’s death occurred barely one week after they both recorded one of his music tracks for the upcoming album that was expected to be released before the end of the year.

Also speaking on Uwaifo’s demise, the former President of the Performing Musicians Association of Nigeria (PMAN), Tee Mac Omatshola Iseli, added that the late icon was hospitalised for a few days before the demise.

The former PMAN president, meanwhile, stressed that the contribution of the Octogenarian to Nigeria’s music industry was immeasurable and that the industry would miss his contribution to entertainment.

He said: “I had the pleasure to meet Victor Uwaifo for the first time upon my arrival in Nigeria in November 1970. We shared the stage countless times during festivals and shows, he was a great member of the Performing Musician Association of Nigeria and a contributor to the development of the music industry of Nigeria.

“May he rest in perfect peace in heaven and continue to play the guitar and the flute with all other great musicians assembled”, the former president added

Prof. Sir Victor Uwaifo (MON) died today Saturday 28th August. He was hospitalized for a few days. He was born on 1st March 1941. He was a Nigerian musician, writer, sculptor, and musical instrument inventor, University lecturer. A music legend, first Honorable Commissioner for Arts, Culture and Tourism in Nigeria.

He was the winner of the first gold disc in Africa (Joromi) released in 1965 and seven other gold discs in Guitar boy, Arabade, Ekassa series, and Akwete music.

He recorded under the name Victor Uwaifo and His TItibitis. He is recognized as the most educated performing music legend, musical instrument inventor, artist, worldwide with a B.A Honors (first-class valedictorian), Masters degree, and Ph.D. in Architectural Sculpture, (University of Benin, Nigeria).