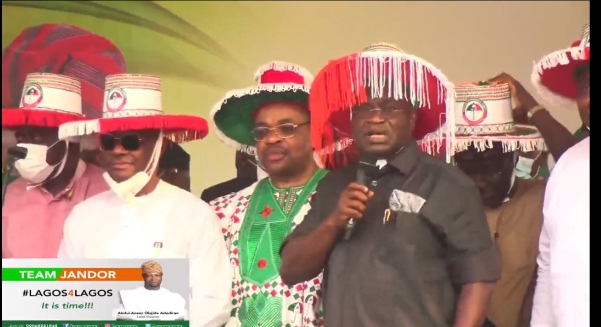 The River State Governor, Nyesom Wike, and his counterparts from four other Peoples Democratic Party (PDP) ruling states, Abia, Enugu, Oyo, and Akwa Ibom; Okezie Ikpeazu, Ifeanyi Ugwuanyi, Seyi Makinde, and Emmanuel Udom respectively, have jointly assured their party that they are solidly behind any candidate present by PDP for Lagos governorship come 2023.

They stated that resources to ensure power is taken from the ruling All Progressives Congress (APC) in Lagos, were enormously available to achieve the set agenda and that any of the party members that emerge as PDP flagbearer in the state would not only enjoy their support but also would be on ground to monitor electoral processes.

As gathered, plans have been concluded to adopt the leader of the Lagos4Lagos movement leader, Azeez Adeniran, popularly called Jandor as their preferred candidate for the 2023 gubernatorial poll in the state.

Beside the governors, the former senate president, Bukola Saraki, expressed satisfaction on changes Lagos is witnessing from seas of APC members that have joined PDP which he claimed their defection was a plus to the party such that has guaranteed victory for the opposition in Lagos.

Others at the Tafawa Balewa Square (TBS) on Friday to receive Jandor and other members of the movement, one of the dissident groups in the Lagos state chapter of APC, including the PDP national chairman, Iyorchia Ayu, and House of Representatives members promised to accommodate and support everyone that defected to PDP.

Ikpeazu, who spoke on behalf of the PDP governors forum chairman and Sokoto state governor, Aminu Tambuwal, said that their visit to Lagos was an indication that the governors were ready to ensure the party wins not only the gubernatorial seat but also the senate and house of representatives seats.

On the defection of Jandor and other members, the governor described the Lagos4Lagos movement leader as a bridge-builder that would link PDP to the seat of power.

He said: “We are here to welcome Jandor because he is not only important but strategic. Our presence in Lagos today is an endorsement of the fact that the PDP is the only democratic party in the country.

“Jandor is now one of us and that is why we have left all we are doing to visit Lagos and receive Jandor. This is a bridge builder and he is the one that will transmit us from a geriatric to an active government that would be controlled by the youths in Lagos.

“I am urging the PDP members in Lagos to give him maximum support so that he can contribute his quota to the successes of the party in Lagos during the next election”, the governor added.

Wike, while corroborating the Ikpeazu, stressed that the party’s conclusion was to install the first PDP governor in Lagos and ensure that the party takes absolute control of governance across the commercial capital.

The river state governor assured members and Lagosians that PDP leadership have resolved to concentrate on the state during the next poll.

On the part of Saraki, the former senate president promised Jandor and other members of the Lagos4Lagos movement that pulled out of APC of his total support for their course, saying we must deliver Lagos from the APC.

“I welcome Dr. Jide Adediran to our party and I am excited to work with him to deliver victory for our party in Lagos State”, he added.

Earlier, Jandor told the gathering that their intention to join PDP was the openness and democratic nature of the party which had often given members freedom to assume any office using its platform.