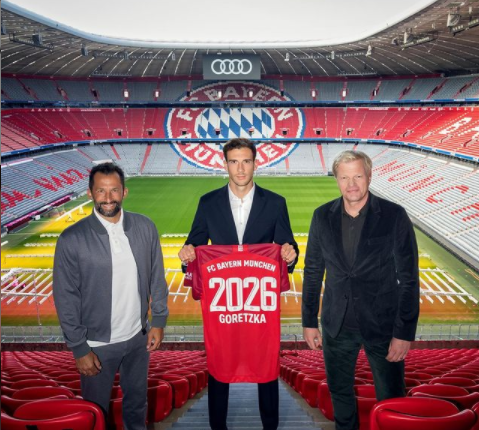 The German midfielder, Leon Goretzka, has turned down English giant, Manchester United, contract offers and
committed himself to a long-term future with Bayern Munich.

Goretzka, who was predicted by soccer pundits as the ideal solution to Manchester United midfield challenges, has signed another four years contract, extending his stay with the German club until 2026.

The German player, whose previous four-year contract ended summer next year, on Thursday, signed the contract at the Allianz Arena, after the Chief Executive Officer, Oliver Kahn, and the director, Hassan Salihamivic, handed him the new deal.

Addressing newsmen after the contract extension, the playmaker described the Bayern Munich as a professional club that guarantee him success in his career.

He said: “The team, the club, and the environment are not just highly professional, but also familiar. This mixture is one of the things that guarantee success at this club. I’m very happy to be extending my contract until 2026.”

Goretzka has played in each of Bayern’s four Bundesliga games so far this season, with Julian Nagelsmann’s side currently second in the German top-flight behind Wolfsburg after three wins and a 1-1 draw with Borussia Monchengladbach.

The Germany international had entered the final year of his contract at the Allianz Arena and was on a list of midfield targets for United during the last transfer window, along with Eduardo Camavinga, who signed for Real Madrid, and Chelsea recruit Saul Niguez.

Gortetzka arrived at the Bavaria club in 2018 from Schalke and played a key role in Bayern’s Champions League triumph last year under their former head coach Hansi Flick.

The 26-year-old has won three Bundesliga titles, the DFB-Pokal twice, the UEFA Super Cup, and the FIFA Club World Cup during his time at Bayern. He also featured in their 3-1 victory over Borussia Dortmund in August in the German Super Cup.