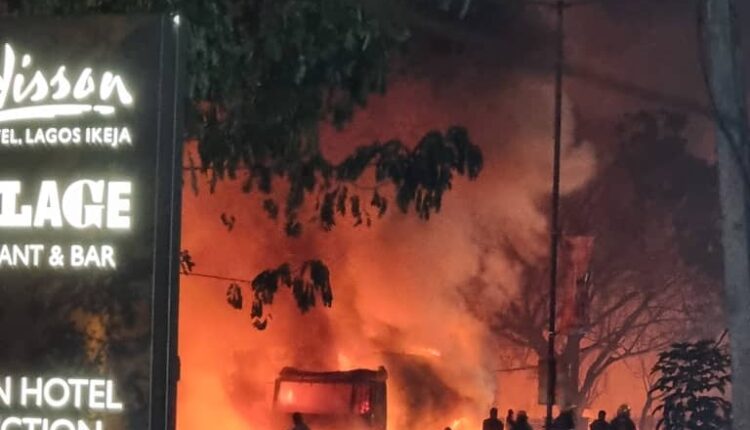 No fewer than two of the 13 persons that sustained varying degrees of burns during a tanker explosion along Mobolaji Bank Anthony way in Ikeja were reported to have died in transit to the hospital, increasing the death toll from three to five persons.

It was learnt that the two persons sustained high degrees of burns from the fire that emanated after the explosion and could not be managed before arrival at the hospital for further treatments.

As gathered, three of the five casualties were said to be staff of a Chinese restaurant sited on the ground floor of Ogun State Property Investment Corporation (OPIC) plaza, a few meters away from Sheraton Hotels and Towers and that at least 22 vehicles including the tanker, were razed after the fire spread to buildings and other facilities within the axis.

It was learnt that the incident occurred some minutes past 10 pm and several eyewitnesses narrated that the tanker, which was moving along the route, developed a fault, leakage, and parked in front of the OPIC Building before it caught fire

The casualties figures were confirmed by the Acting Zonal Coordinator, southwest Zonal Office, NEMA, Ibrahim Farinloye, and LASEMA officials during an interview with newsmen on Friday, where they disclosed that the deceased were recovered within the premises by emergency officials during a search and rescue operations.

Farinloye hinted that the emergency officials were yet to ascertain claims by residents and staff of firms in Ogun State Property Investment Corporation (OPIC), one of the buildings that were severely affected by the inferno, that a boy, believed to be within the axis before the explosion occurred, was trapped in the building.

He noted that the claim was made during a headcount carried out by representatives of the offices and supervised by emergency officials to ascertain the number of casualties that could have been trapped in the buildings.

According to him, during a headcount, all we got from the restaurant and representatives of other offices were that a boy is missing. But we were surprised when we intensified search and rescue operations and discovered three bodies. One of the bodies was identified as Mr. Balogun, who was manager of the restaurant.

Meanwhile, the Public Relations Officer (PRO) for LASEMA, Nosa Okunbor, who disclosed that the fire has been put out, narrated that the pressurized gas that escaped from the fully loaded tanker into the atmosphere was responsible for the spread, saying, it spread to OPIC plaza where the Chinese restaurant domiciled.

Okunbor added that the gas was ignited at the eatery which further wrecked 22 vehicles parked within the OPIC premises, trapping some occupants and left the building extensively damaged. 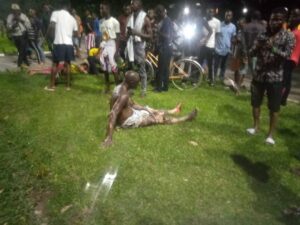 The LASEMA spokesman, in a statement made available to newsmen, stressed that the affected building has been cordoned off for security as well as safety purposes and that it could be opened after further enumeration had been conducted by emergency officials.

“However, the Agency’s Paramedics Team administered Pre-Hospital treatment to numerous victims that sustained various degrees of burns, before they were taken to different government-owned hospitals including the Burns Unit of Lagos State University Teaching Hospital (LASUTH), and General Hospitals nearest to the incident scene for further treatment.

“Also, the Agency’s heavy-duty equipment including the Goliath-the giant forklift, and a Flat body truck, were deployed to recover carcass of the burnt gas tanker, while dampening down operation continued for hours after”.

.How we put out the inferno- Lagos firefighter boss

Narrating how the fire was finally extinguished, the Director, Lagos State Fire and Rescue Service, Margaret Adeseye, hinted that the prompt response of the firefighters prevented destruction and aided the rescue of lives from the scene.

Adeseye, who made the disclosure at the scene of the unfortunate incident which was reported at about 2235 yesterday,  informed that three Fire Engines and Crew were promptly detailed to rescue the situation and they completely put out the fire at the incident scene.

She said: “A distress call was received from Opic Plaza, 28/30 Mobokaji Bank Anthony Way, Ikeja that a Gas Truck heading towards Ikeja reportedly exploded from a leakage which travelled through atmospheric conditions to meet an ignition point on the ground floor of the OPIC Plaza which houses a restaurant among other outlets resulting to Fire Outbreak”.

She however concluded that Firefighting operations were concluded at 0030 hours Friday as comprehensive post Fire disaster investigation and assessment has begun in earnest.