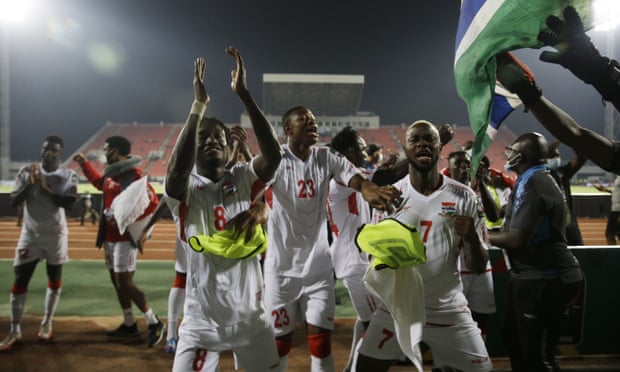 The Gambian national football team has qualified for the African Cup of Nations (AFCON) quarter-final stage after defeating their Guinean opponent 1-0, marking the first time the West African nation would be attending the tournament and progress to the knockout stage.

Although the Gambians were the underdock before the game, Musa Barrow’s 71st-minute winner ensured they booked a spot in the quarter-final of the tournament where they were expected to meet the Host nation, Cameroon.

The victory over the Guineans ensured they continued their surprise run at the AFCON, advancing to the quarter-finals at the expense of their fellow West African nation.

Barrow, one of the outstanding performers at the tournament, was set up by a defense-splitting pass from Yusupha Bobb and the Bologna forward then took the ball away from the Guinean defence with his right foot, before finishing emphatically with his left foot to settle the last-16 tie.

The goal opened up what had been a tense contest in Bafoussam with Guinea, who were missing their suspended captain, Naby Keïta, forced to push forward in search of an equaliser. Ibrahima Conté thought he had found it when he turned home a cross at close range, but the defender was flagged offside – with the VAR backing the on-field decision.

Guinea then hit the woodwork twice in quick succession, a cross rebounding off the post before the Gambia keeper Baboucarr Gaye spectacularly tipped José Kanté’s shot on to the crossbar. There was also an appeal for handball after Omar Colley blocked a follow-up effort. Both sides finished with 10 men, with Conté and the Gambia substitute Yusupha Njie both dismissed late on for picking up two bookings as the underdogs held on for a famous win.

The Gambia came into their first-ever Afcon finals ranked 150th in the world, the lowest of all the 24 participants – but followed up group-stage wins over Mauritania and Tunisia with another win here, made all the more impressive by the fact two players had to pull out of the game an hour before kick-off due to food poisoning.