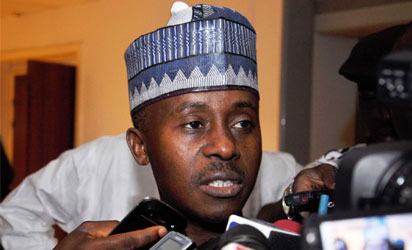 A Federal High Court sitting in Abuja has sentenced former chairman of the House Representative ad-hoc committee on fuel subsidy, Farouk Lawan, to seven years imprisonment over his involvement in a $3 million bribery scandal.

The court further directed that Lawan return the sum of $500, 000 said to have been collected from Femi Otedola, in order to exonerate Zelon Petroleum and Gas from lists of companies in 2012 fuel subsidy scam and return it to the Federal Government coffers.

In a judgement delivered by Justice Angela Otaluka, on Tuesday, the former lawmaker was found guilty of three-count charges bordering on bribery and abuse of office while serving as chairman of the committee probing the fuel subsidy scam.

Otaluka, on the suit with No. FHC/HC/CR/76/2013, noted that the evidence listed and submitted before the court by the prosecution counsel, during a proceeding, remains unshaken during cross-examination of witnesses presented.

The judge further ruled that the conduct, responses, and submissions of the defendant as well as witnesses presented since the commencement of trial have also helped to establish the charges in the count leveled against the lawmaker.

Count two stated that the defendant collected the sum of $500,000 as a bribe to exonerate Zelon petroleum and gas from the fuel subsidy probe report been carried out by the House of Representatives.

Justice Otaluka further ruled that evidence proved that Lawan, after receiving the first and second tranche of the payment, demanded a balance of payment from Otedola.

According to the judge, Lawan, after receiving the second tranche, never alerted any security agencies and the Economic and Financial Crimes Commission (EFCC) to get their support in the investigation of Otedola.

The judge said: “On counts one and two, you are sentenced to seven years while for the third count, the defendant will go on a five years jail term. All the charges will run concurrently”.