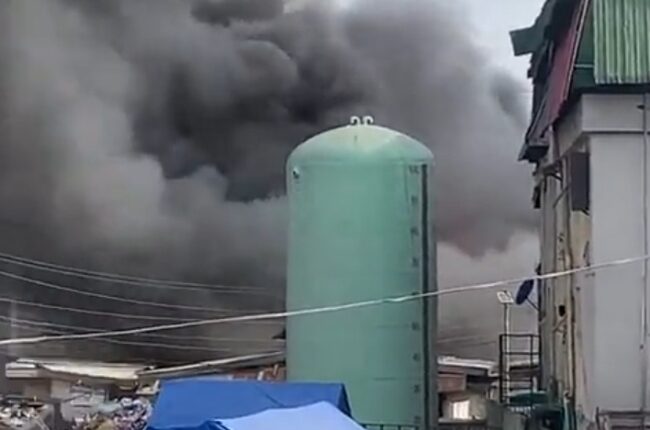 A section of the popular Tejuoso market has been reported gutted by fire with traders losing goods worth millions of naira to the inferno in the state.

As gathered, the fire that disrupted commercial activities within the market started a few minutes before 5 pm and all efforts by traders to put it out had proved abortive.

The officials of Lagos State Fire Service, on Tuesday, were already battling with the inferno to prevent it from spreading to other sections of the market.

The Permanent Secretary, Lagos State Emergency Management Agency (LASEMA), Femi Oke-Osanyintolu, and the Director of fire service, Margret Adeseye, confirmed efforts by emergency agencies to put out the inferno before spreading further to other locations.

Oke-Osanyintolu disclosed that the fire started from Kitchen Plaza where traders deal in tailoring materials, clothing, and industrial machines, and was spreading fast than expected.
According to him, investigations conducted at the incident scene revealed that the fire started at about 3:50pm when an unknown woman was trying to refuel a working petrol generator.
“Fortunately, no loss of life nor injuries were recorded. However, lots of properties were destroyed as a result of the fire. The fire also destroyed four rooms in an adjacent church Devine Gospel Deliverance Church”, he added.

Adeseye disclosed that the state fire officials from Ilupeju and Isolo stations responded to the inferno that affected the section of the market with about 2 plots of Land.

While adding that they were assisted by the Federal fire service led by ACFS Adebanjo, the director stated that the fire was already under control and that all that was left at the scene was the damping down exercise to prevent any pocket of fire from escalating