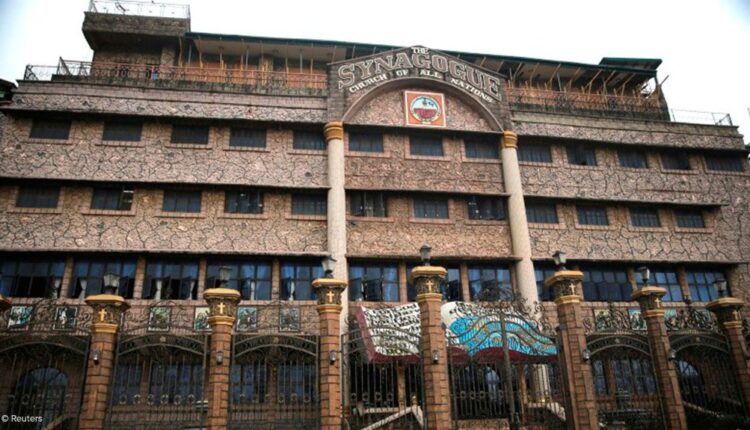 The ongoing candle night service for the late founder of Synagogue Church Of All Nations (SCOAN), Temitope Joshua popularly called T.B Joshua was reported to have been halted after a mysterious fire gutted a section of the church, forcing members to abandon the service for safety.

The Guild gathered that the fire started at about 11:30 pm, minutes after the all-night service commenced in honour of the deceased cleric at the church headquarters in Ikotun axis of Lagos State.

Sources said that the fire that had affected a major section of the church sited on a large expanse of land, was caused by an electric spark from an appliance used in one of the buildings within the premises.

Eyewitnesses narrated that the fire started after hundreds of members, that had thronged the church premises to participate in the service, returned from the SCOAN mountain where they lighted candles to honour the late pastor.

The event which marked the commencement of weeklong events to celebrate the life and times of the former pastor was stopped as well as the live broadcast on the church Television, Emmanuel TV, was also paused after members began to scamper for safety.

It was observed by our correspondent that the station, after the pause, shifted focused to tributes and other deliverance services performed before T.B Joshua passed on.

Confirming the fire disaster, the General Manager of the Lagos State Emergency Management Agency (LASEMA), Dr. Femi Oke-Osanyintolu, and Director of the state fire service, Margret Adeseye, told newsmen that emergency officials were currently battling to put out the fire.

They noted that the efforts of the fire service officials from Ikotun fire station and other emergency officials were to ensure that the inferno does not spread to other property within the church premise.

Confirming the inferno, the church in a statement made available to newsmen described the fire as minor, just as it assured worshippers that the occurrence would not affect the ongoing series of events set aside to celebrate legacies of the late cleric.

The statement reads: In the late evening of Monday 5th July 2021, there was a minor electrical fire incident at a store house within The Synagogue, Church Of All Nations (SCOAN) complex. The incident was quickly brought under control without any injuries.

“As part of the preparedness for the weeklong services celebrating the life and legacy of Prophet TB Joshua, The SCOAN has worked closely with relevant government agencies including the Lagos State Fire Services, whose members were on ground at the time of the incident.

“We thank God for His continued protection. We assure the general public that there is no cause for alarm and the services celebrating the life and legacy of Prophet TB Joshua will continue as scheduled. Nothing outside God’s control can happen to His children”.

T.B Joshua, a televangelist, philanthropist, leader, and founder of The Synagogue died on June 5 at the age of 57, few days before his birthday, and his widow, Evelyn Joshua, led the candlelight procession at the SCOAN Faith Resort in the Ikotun area of Lagos.

SCOAN had announced that TB Joshua would be laid to rest on Friday, July 9, at the church premises in Lagos.

The Lagos State Government had inspected facilities at the Synagogue Church of All Nations for COVID safety and prevention protocols compliance in preparation for the funeral of its late founder, Prophet Temitope Joshua.

Speaking after the inspection of the church facilities and meeting with the church officials, Abayomi said the inspection was in line with the third wave mitigation strategy of the Lagos State Government to prevent the importation and spread of new deadly strains of COVID into Lagos and Nigeria.

Abayomi added that the inspection and meeting with officials of SCOAN were to limit any possibilities of the introduction of foreign COVID variants among the congregation and by extension to the community.

While noting that there are some areas of infection prevention protocols that needed strengthening in the church, Abayomi assured that those areas would be strengthened before and during the funeral activities.