Just In: Obasanjo, Tambuwal meet over insecurity, other… 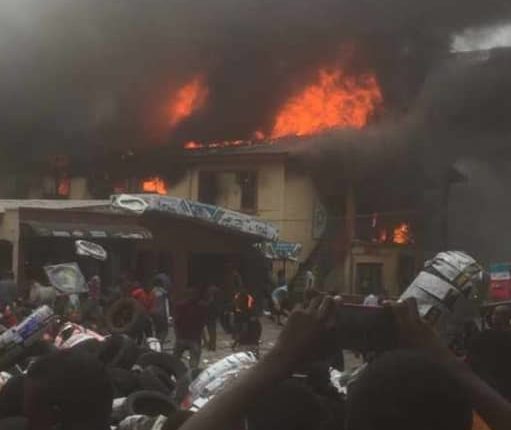 Hopes of traders at Olowu market in Ikeja Local Government, Lagos State, of returning on the next market day to continue their trading activities were cut short on Saturday when fire razed several stalls and destroyed property worth millions of Naira within the market.

The fire was said to have started a few minutes past 3 pm, a time when the traders were hoping to conclude trade and leave the premises in compliance with the state Governor, Babajide Sanwo-Olu, directives on market closure which was aimed at assisting the state gain control over coronavirus.

It was gathered that fire started from 42, Olowu Street, off Awolowo Road, in Olowu axis of Lagos in Ikeja, a one-storey building stocked with highly flammable materials.

The Lagos State Emergency Management Agency (LASEMA), Public Affairs Officer (PAO), Nosa Okunbor, hinted that the fire was put out by a combined team of LASEMA, Federal, and state fire service officials, who ensured that the inferno does not spread beyond the limit.

According to him, though no deaths nor injuries were recorded in the incident which ravaged the affected building that serves as offices for various organizations destroyed properties worth a fortune.
“After successfully extinguishing the fire through combined efforts of the Agency’s responders and its stakeholders, Post Disaster Assessment conducted by the Agency’s officials revealed that the fire started from a large storage room in the affected building where Auto paints (Tinner) were stored”.