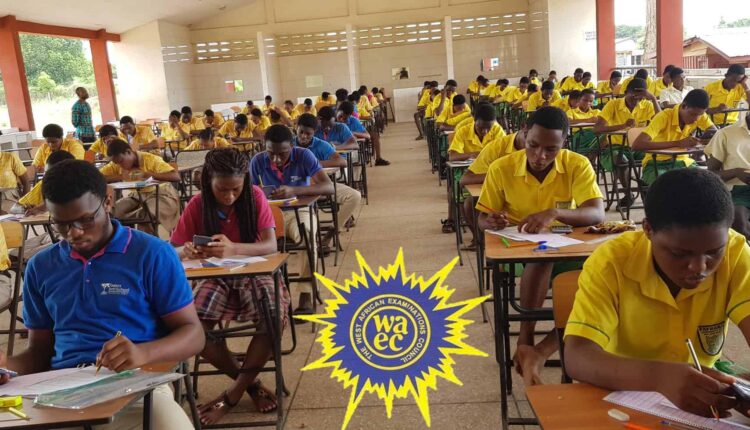 The Federal Government has banned secondary school students that were not in terminal classes from applying and sitting for the West African Senior School Certificate Examination (WASSCE), the National Examination Council (NECO), and National Business and Technical Examinations Board (NABTEB) across the country

It added that any student, particularly in public schools, not in the terminal classes found to have written the examination, henceforth, would be expelled from the school immediately to serve as a deterrent to others planning to embark on such actions.

The apex government stated that the decision to restrict students in Senior Secondary (SS) 1 and 11 classes from sitting for external examinations was taken to maintain decorum and boost standards of education in schools.

Through a circular issued by the Federal Ministry of Education to principals of Federal Unity Colleges, the government stated that findings revealed that many students in SS1 and 11 that had earlier written external examinations often return to classes and distract their peers from learning.

In the circular with no: FME/DBSE/US/DOC/III/16 and tagged: Students Writing External Examination in SS1 and SS2 classes, the central government stressed that strict enforcement would be carried out to prevent contravention across the country. 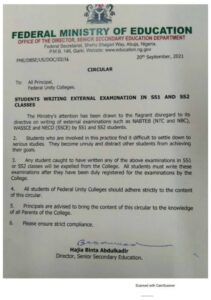 Speaking to The Guild during an interview on Friday,  the Director of Press and Public Relations, Ben Bem Goong, stated that the effort was to ensure sanity and an effective education system.

Goong, who spoke on the circular signed by the Director of Senior Secondary School, Binta Abdulkadir, said: “This is for the entire students either in public or private schools. And we are taking this step to ensure that this action does not hold anymore across the country”.

The circular reads: “The ministry’s attention has been drawn to the flagrant disregard to its directive on (the) writing of external examinations such as NABTEB (NTC and NBC), WASSCE, NECO (SSCE) by SS1 and SS2 students.

“Students who are involved in the practice find it difficult to settle down on serious studies. They become unruly and distract other students from achieving their goals.