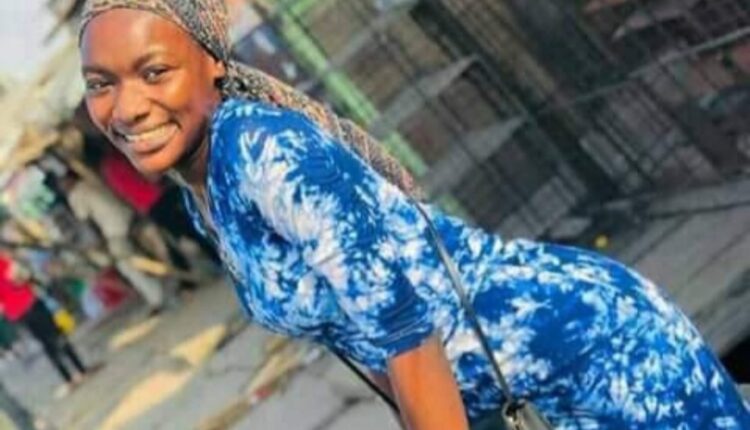 The remains of an 18-year-old female varsity education seeker, Monsurat Ojuade, allegedly killed by a stray bullet shot by a dismissed Policeman, Samuel Philips, has been laid to rest, amid tears from members of her families, friends, and others in Lagos State.

Monsurat’s remain was laid to rest at the Muslim burial ground in Agege Local Government, barely a month after she was killed by police during a raid in Ijeshatedo, Surulere Local Government.

At the burial ground on Saturday, members of the teenager’s family were seen with gloomy eyes after her body was lowered into the grave dug for her.

Also, some members of the Civil Society group were seen demanding total justice for the deceased teenager who died last month, September 11th, 2021.

The deceased teenager, who was allegedly shot by a former law enforcement officers from Panti station at her house on 53 Mogaji Street, along Agbebi road In Ijeshatedo, was confirmed dead by medical experts at a private hospital in the state.

Speaking to newsmen after the burial that was carried out in accordance with Muslim rites, the counsel to the victim’s family, Israel Mbaebie, told newsmen that they decided to collect her body after the Nigerian Police dismissed the alleged killer and arraigned him before a court in Lagos.

Mbaebie, meanwhile, condemned the Lagos Command of the Police for withholding the bio-data of the accused ex-officer as well as his pictures to serve as a deterrent to other officers not adhering to the ethics of the profession.

He also argued that the Nigerian Police cannot claim to be standing for justice when it has decided to hold back vital information that would aid prosecution and ensure justice for the deceased student who scored 236 in Joint Admission and Matriculation Board (JAMB) examination and was seeking for admission into a varsity in the country.

Aside from that, the legal practitioner also accused the Command of not fully sympathizing with the bereaved family, saying why will the command not attend the burial since they know that this act was committed by their former officer.

The 18-year-old’s death occurred exactly one month after celebrating her 18th birthday where she rolled out her plans before next year.

As gathered, the Ojuade family, who were still pained over the murder of their child, have demanded justice, appealing that the State Governor, Babajide Sanwo-Olu, and Inspector-General of Police, Alkali Baba, to intervene and unravel the killer of their daughter.

Speaking to our correspondent, the mentor to the deceased, Ismael Oguntoyinbo, while narrating how the teenage girl was killed, described the deceased as a brilliant and well-cultured lady who would be missed.

Oguntoyinbo said: “On that fateful day, Monsurat and her sister, Laide, were at their mother’s shop, in front of their house, when they suddenly saw everyone running and they decided to also run in order not to be caught in the web of any unforeseen actions.

“She and her sister ran into their compound and closed the gate but the Police later came there and force their way into the house. And minutes after gaining entrance, the law enforcement agency shot into the compound.

“After the law enforcement officers left, we discovered that Monsurat had been hit by bullet on both legs. In order to save her, we quickly took her to a public hospital where we were told that the doctors are on strike.

The mentor to the deceased hinted that the referral note they were given indicated that she was shot a close range by the law enforcement officer.

According to him, this is unbelievable and we are appealing to everyone that can assist us to get justice on this case to do so. we want justice for Monsurat.