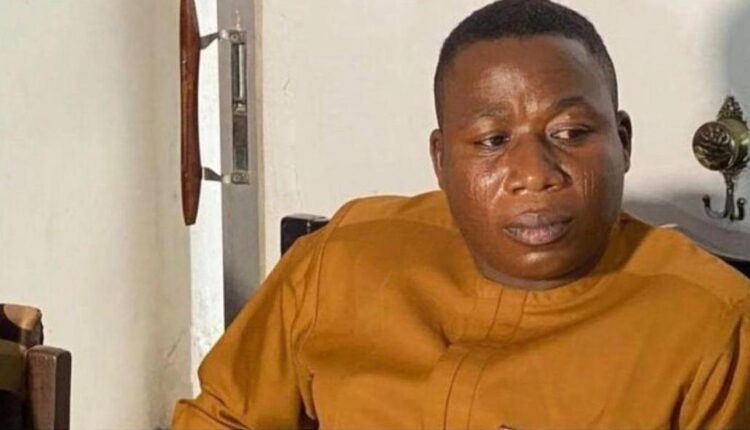 The Department of State Services (DSS) has taken responsibility for the midnight raid on the residence of Yoruba rights activist, Sunday Adeyemo, popularly called Sunday Igboho, in Soka axis of Ibadan, Oyo State.

DSS further stated that two persons were killed during the visit to his house as well as arrested no fewer than 13 others including a woman during the attack that lasted for several minutes in the community.

It also revealed that seven AK-47, three pump-action rifles, and ammunition, as well as other items, were recovered from his home during the raid and that those arrested have been detained at its Federal Capital Territory (FCT) Abuja headquarters for questioning after been found in possession of arms during the visit. 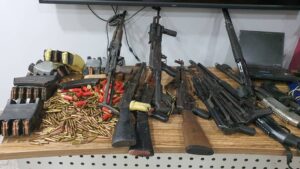 Aside from that, the law enforcement agency has also asked that Sunday Igboho present himself to the nearest DSS office for onward prosecution over his actions, urging his advisers and followers to educate him on the country’s constitution.

Confirming their visit to the home of the right activist, Public Relations Officer (PRO) for the security services, Peter Afunanya, on Thursday, disclosed that 12 of the suspects arrested have been paraded while one suspect was currently being profiled to extract other details from him.

Others were Raji Kazeem, Taiwo Opeyemi, Bamidele Sunday, and Amoda Babatunde popularly called Lady K (female), and were confirmed to have been under detention at the DSS office in Abuja. 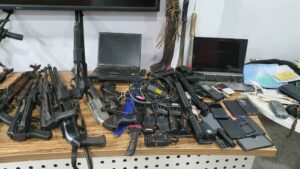 Afunanya stated that the visit to Sunday Igboho’s house was based on intelligence gathered after several investigations which revealed that he had stockpiled arms in his house and that on arrival at the residence, the team was attacked by nine armed men, who were believed to be his guards, noting six of them were armed with AK-47 gun and three others with pump-action rifles.

The spokesman noted that the DSS officer, during the gun battle, killed two armed men and that one operative sustained a gunshot wound on his right hand during the attack that started at about 1:30 am.

According to him, the gun duel which lasted for an hour offered Sunday Igboho an opportunity to escape from the scene and this resulted in the arrest and recovery of different ammunition from the house. 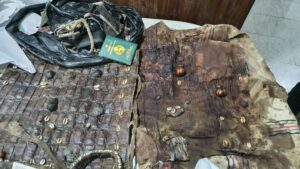 Also recovered from the building, a wallet containing five US Dollars in one currency denomination; local and international driver’s licences in his name, Automated Teller Machine (ATM) cards, a German residence permit with registration No. YO2N6K1NY bearing his name and two whistles.

Others were 50 Cartridges; 18 Walkie-Talkies; three Voodoo charm jackets/traditional body armour; two Laptops and his International Passport as well as many others.

The spokesman hinted that the DSS has alert foreign missions and licencing authorities within and outside Nigeria about the development to prevent any possibility that Sunday Igboho could declare some of his personal permit and identity cards missing in order to seek their replacement.

He said: “This, the arrests and seizures are, no doubt, a confirmation of a grand plan by the Yoruba activists and their cohorts to wage a violent insurrection against the Nigerian State”.