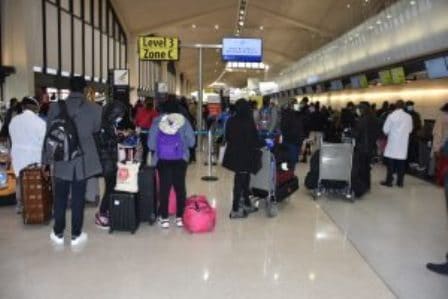 Atleast 435 Nigerians women trafficked to Oman and Saudi Arabia have been discovered to be currently stranded and could be abandoned in the countries by Federal Government if ongoing evacuation mission was not extended beyond August 25, 2020 deadline.

A breakdown of the women discovered to have been trafficked and stranded in the countries showed that over 190 were in Oman while 235 in Saudi Arabia, awaiting the apex government intervention to leave after been abandoned by their traffickers.

The Nigerian names and contacts were said to have been compiled by Journalists International Forum For Migration (JIFORM), Synergy Rescue Initiative (Rescue Mission), Rescue Africans In Slavery (RAIS) foundation and the Nigerians community in Diaspora, after a thorough investigation and forwarded to the apex government agencies.

Some of the agencies were Federal Ministry of Foreign Affairs, National Agency for Prohibition of Trafficking In Persons (NAPTIP), National Commission For Refugees, Migrants and Internally Displaced Persons (NCFRMI), Nigeria Immigration Service (NIS), Nigerians In Diaspora Commissions (NiDCOM), International Organization for Migration (IOM) and others.

Confirming the statistics,  JIFORM, through a statement by its President, Ajibola Abayomi, and made available to The Guild on Thursday, urged the Federal Government to declare a state of emergency against human trafficking in order to rescue, rehabilitate and thoroughly investigate those behind the act in the country.

JIFORM, while appealing to the government for an extension of evacuation mission beyond August 25, 2020 deadline to accommodate the new discovery, hinted that the Nigerian women were being subjected to various inhuman treatments and various unsubstantiated criminal proceedings that had excluded them from linking up the Nigerian mission abroad.

“This is time for the President Muhammad Buhari to further show love to Nigerians in pains abroad largely due to their own faults. We understand the rescue operation gulping huge resources will be terminated by August 25, however, for the sake of humanity, we are pleading for an extension.

“We categorically stated that there was need to declare state of emergency on human traffickers in order to save the youths. While we empathised with the victims, we are not unmindful of their ignorance to jump into the offer they paid through their nose and are now regretting.

“The act is condemnable but for the sake of humanity, the nation should not turn deaf ears to the wailing of her citizens abroad having fed up with the ill-treatments meted to them ranging from forced labour, sexual harassment and unpaid wages, the ladies had to escape to different locations while their hosts, mistresses and employers in return initiated various criminal proceedings against them in order to stop them from applying for lawful evacuation” he added.

JIFORM admonished the media to always double check oversea job vacancy adverts by seeking clarifications from NAPTIP and other security agencies where necessary so as to curb some of the strategies being deployed by human trafficking agents to lure the youths to slavery abroad.