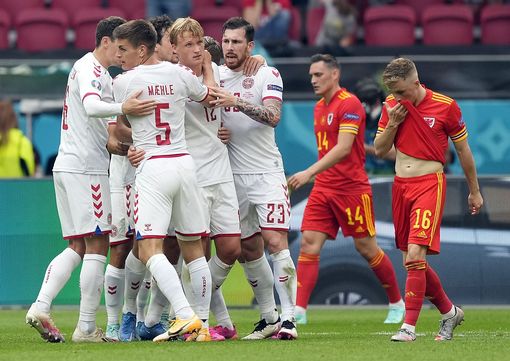 The Denmark football team’s inspiring journey at the Euro 2020 has continued with progress to the quarter-final stage of the competition following a 4-0 win over their opponent, the Wales team, during a second-round fixture.

During the match, the Danish team, who were still without their creative midfielder, Christian Eriksen, and lost another player, Youssuf Polsen, to injury, scored their first goal through Kasper Dolberg’s 27th-minute shot.

After the first goal, the Wales team led by Gareth Bale, pilled pressure on their opponent but all efforts failed to yield results, and rather, the Danish increased their tally with a 48th-minute strike from the score of the first goal following a mistake by Neco Williams.

The Danish forward, Joakim Maehle, put the game beyond doubt with a composed finish, and Barcelona player, Martin Braithwaite, then put the icing on the cake with a fourth before the referee, Daniel Siebert, ended the game.

Denmark will play either Netherlands or Czech Republic in the last eight next Saturday in Baku, meanwhile, Wales would return to action in September against Belarus on the road in their World Cup qualifying campaign.