Sinach becomes first African to attain top spot on US… 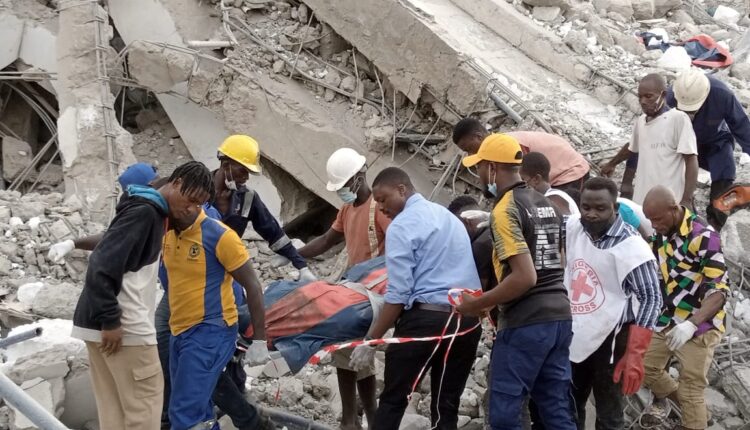 The death toll at the scene of a high-rise building that caved in Ikoyi axis of Lagos State has increased to 20 after six additional dead bodies were recovered by the emergency rescue team under rubbles of the ill-fated structure.

Also, one more person has been rescued under the rubbles, increasing the number of victims that survived the disaster and rushed to a state-owned medical facility, Lagos Island General Hospital in Marina, for adequate medical care to 10.

As gathered, the discovery of additional bodies and rescue by the emergency officials, barely 24 hours after the building caved in, was said to have propelled the team to deploy more equipment to fast-track completion of the rescue operations.

The death toll was confirmed by the spokesman for the National Emergency Management Agency (NEMA), Ibrahim Farinloye, on Tuesday after the team removed another body from the rubbles.

Earlier, the State Government disclosed that no fewer than three persons rescued and admitted at the hospital have been discharged from the medical facility after being certified stable by the officials at the hospital.

The Deputy Governor, Dr. Obafemi Hamzat, said: “Our search and rescue operation is ongoing to remove those possibly still trapped under the rubbles. Our focus right now is to get people out alive. This morning, we took out two people alive and they are responding well to treatment in the hospital”.

Hamzat, meanwhile, condemned what he called “needless gathering” of people who had nothing to do with the rescue operation at the scene, stressing that their presence was distracting those involved in the search efforts.

“What is currently happening at the site of the incident is a search and rescue operation. It is not so good to have a lot of people at the site. Sometimes, the rescuers require silence to be able to hear the voices of those who may still be trapped. The operation is ongoing and we hope we will be able to rescue more. We will not leave the site until we are able to account for everyone in the building,” Hamzat said.

The Deputy Governor disclosed that the collapsed structure had been sealed off by the State Government last June because of low structural integrity test and demanded the anomaly be corrected before the construction could be allowed to go on.

Hamzat said the project manager was being expected to report back to the Government on details of the correction before the incident.