Just in: Davido’s fiancee recovers from coronavirus, status on negative 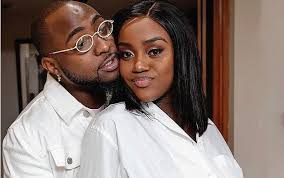 Weeks after foremost music artiste, David Adeleke, came online with news of his fiance, Chioma, being positive to Coronavirus, the popular singer has disclosed that the mother of his new baby had recovered from the deadly virus infection after receiving consecutive negative test results to the disease..

He said that Chioma had tested negative to global pandemic twice and that results from tests proved that his fiance was free of the virus.

Through a post on his twitter handle on Sunday, Adeleke confirmed status of the young mother to be negative to coronavirus by dropping impressing  comment and commending his fans for support he received from them.

Adeleke expressed satisfaction on how his fans had supported his family with prayers during the trying times, just as he assured well-wishers of his love and admiration.

“Glory be to God. Chioma has now tested negative twice to COVID19. Thanks to you all for prayers. We love you”, he said.

Glory be to God .. Chioma has now tested negative twice for Covid19 … Thank you all for prayers …. We love you ..