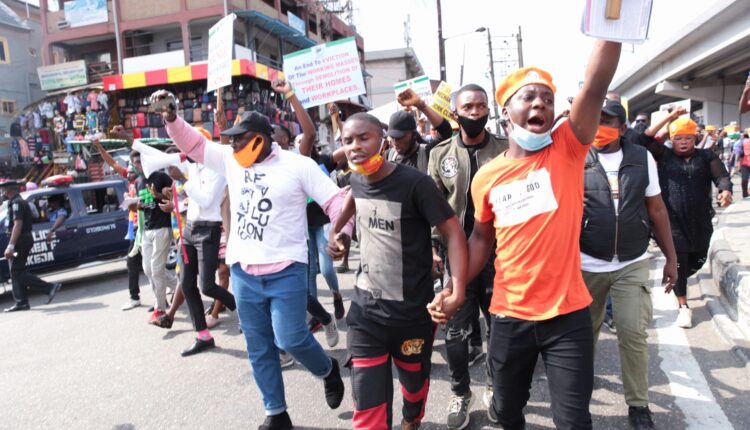 A Mobile Court sitting in Oshodi, Lagos State has set a journalist, Agba Jalingo, and 18 other revolution fighters earlier arrested and detained by the Nigerian Police for allegedly protesting against the act of repression and spate of insecurity across the country.

The protesters, who were arrested for allegedly raising concerns over President Muhammadu Buhari’s anti-graft policy, which they claimed was aiding public officeholders to divert funds, economic policies, and other actions of the administration believed to be affecting the citizens.

Released by the court on Wednesday, after about six hours in detention, Jalingo and the other protesters were seen walking out of the Safety Arena, Oshodi where the court sitting was held for their houses.

It would be recalled that the Convener of  RevolutionNow movement and publisher of Sahara reporter, Omoyele Sowore, who led the protesters to the Freedom Park in Ojota, escaped arrest after sighting the law enforcement agency on their arrival.

While Soworo escaped police arrest, Jalingo, was not so lucky as he was arrested alongside 18 other protesters who claimed to be demanding for good governance from the All Progressives Congress (APC) led Federal Government in the country.

While in detention, a police source told The Guild that the protesters allegedly declined to respond to questions thrown at them and that efforts to make them write a statement on reasons for their actions further provided abortive.

According to the police source, after efforts to persuade them failed, the protesters were charged to court where it was believed they would speak on the reason for engaging in a protest without seeking permission.

After much deliberation, the source added that the magistrate cautioned the protesters against disrupting public peace and directed the law enforcement agency to set them free.

When The Guild contacted the Police Public Relations Officer (PPRO), Lagos Command, Bala Elkana, who confirmed that the protesters were detained for engaging in a march viewed to be unlawful.

Elkana said: “The protesters were arraigned before the magistrate listen to the case and cautioned the protesters against engaging in any unlaw acts in the state”.