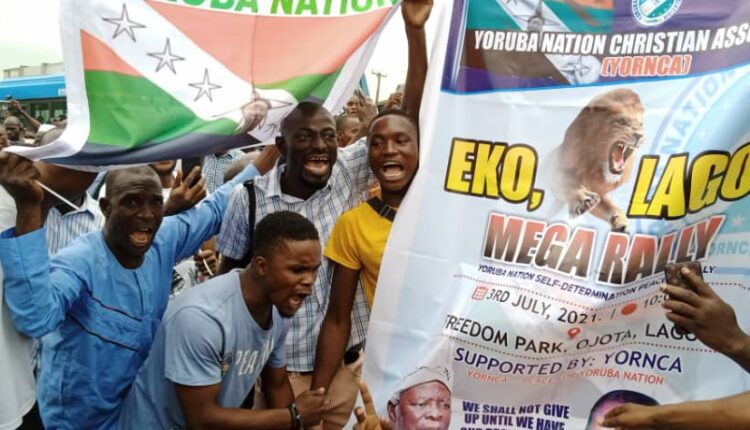 Share
A Lagos State Magistrate Court sitting in Yaba has granted bail to the 48 Yoruba Nation agitators arrested during a peaceful rally organized to create awareness on the need for the secession of Southwest states from Nigeria.

The court further ruled that each of the agitators be made to provide N300, 000 bail bond as well as two sureties and that one of the sureties must be a member of the suspect’s family.

Ruling on the application filed by their counsels led by Olasupo Ojo and Oladapo Kayode, after their arrest in Ojota axis of the state, the court added that the other surety to be presented should be a community leader or a clergy with tax clearance to Lagos State Government.

The Communications Manager for the umbrella body of Yoruba Self-Determination Groups, Ilana Omo Oodua, Maxwell Adeleye, in a statement made available to The Guild on Monday, confirmed the development, saying the protesters were arrested on 3rd of July, 2021 in Lagos.

It would be recalled that the protesters were picked by the law enforcement agency barely two weeks ago during a peaceful demonstration at the Gani Fawehinmi park in Ojota and detained for contravention of the state laws.