JUST IN: Chelsea’s former striker passes on @58 after long battle with cancer 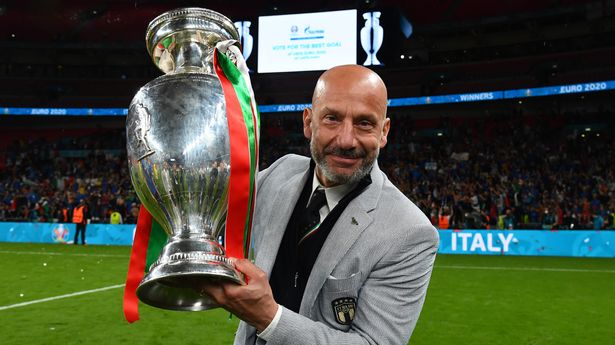 Italian and Chelsea Football Club’s former striker, Gianluca Vialli, has been reported dead at the age of 58 after a long battle with pancreatic cancer.

Vialli died barely a month after resigning from his position as an assistant coach with the Italian national team, to undergo treatment for the disease.

His death was announced on Friday by the management of football clubs he played before retirement including Chelsea, Juventus, Cremonese, and Sampdoria.

The deceased striker, who assumed the role of a player-manager following Ruud Gullit’s dismissal in early 1998, guided the English club to lift the League Cup, UEFA Cup Winners’ Cup, and UEFA Super Cup.

Vialli’s death followed the untimely deaths of Pele and Sinisa Mihajlovic, who both lost their long-running battle with cancer after excellent football careers.

Born in Cremona, Vialli began his playing career with local side Cremonese and helped them to win promotion into Serie B before attracting attention from clubs higher up Italy’s football pyramid.

Sampdoria bought into his obvious potential in 1984, with a productive partnership struck up with Mancini, with the pair nicknamed ‘The Goal Twins’ as they inspired a historic Serie A title triumph in 1990-91.

Another Serie A crown, Italian Cup and UEFA Cup were captured in Turin, but the undoubted highlight of a four-year stint with the Bianconeri came when beating Ajax in the 1996 Champions League final.

Ruud Gullit tempted Vialli to Chelsea in 1996, as part of an exciting rebuild at Stamford Bridge, with the Italian named player-manager in 1998 at the age of 33 when the Dutch tactician was relieved of his duties.

Vialli guided the Blues to League Cup and Cup Winners’ Cup glory and retired from playing in 1999 with 259 club goals to his name from 673 appearances.

As a manager, Vialli helped Chelsea to an FA Cup triumph in the last final played at the old Wembley Stadium in 2000, but was sacked just five games into the 2000-01 campaign.

He had a brief spell as boss at Watford during the 2001-02 season but turned his attentions to punditry after leaving Vicarage Road.

At the international level, Vialli earned 59 caps for Italy, scoring 16 goals, and was part of the team that participated in the Euro ‘88 tournament and helped the national team to the World Cup semi-finals on home soil in 1990.

JUST IN: Buhari to lead campaigns across 10 states