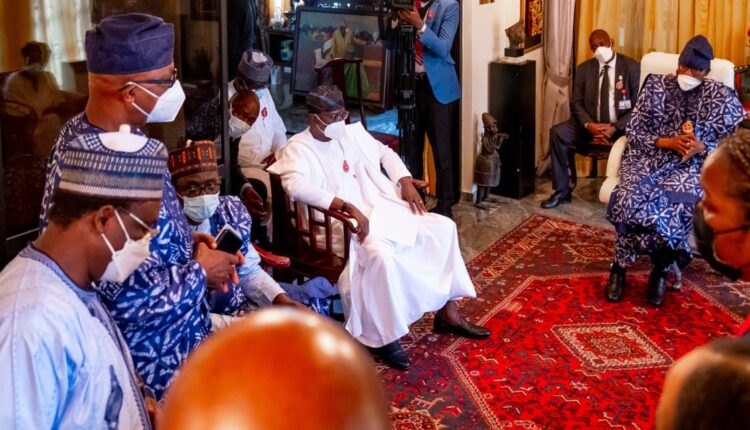 President Muhammadu Buhari has led State Governors to pay a condolence visit to the family of the Head of the Interim National Government, late Ernest Shonekan, to commiserate with the deceased’s family.

Buhari was accompanied to the home of the deceased elder statesman, who passed on at the age of 85, by the Lagos state governor, Babajide Sanwo-Olu, his Ogun, and Yobe state counterparts, Dapo Abiodun and Mai Mala Buni.

The president and his entourage, who arrived at Shonekan’s house around Lugard Avenue in Ikoyi axis of Lagos at about 4:40pm, were received by members of the deceased family.

Buhari, who was on a one-day visit to Ogun state on Thursday where he commissioned projects done, stopped in Lagos on his way to Abuja and spent some time commiserating with the family of the former Head of the Interim National Government.

He alongside the three state governors sympathised with the family over the demise of Shonekan, who died in Lagos after a brief illness 48 hours earlier.

Shonekan was at the helm of affairs in Nigeria between August 26 and November 17, 1993 after General Babangida stepped aside as military president.

Hours after news of the Octogenarian filtered in, the president, through a statement released by his Special Adviser on Media and Publicity, Femi Adesina, extends deepest condolences to the deceased’s wife, Margaret, loved ones, as well as the government and people of Ogun State over the octogenarian’s demise.

As an internationally-respected statesman, Buhari affirms that, with courageous wisdom, Shonekan left his flourishing business career to become the Head of Government, at a delicate time when the country needed someone of his calm mien and pedigree to save the ship of state from sinking.

The President noted that the head of interim national government demonstrated to all that his love for the country and commitment to her development, peace, and unity transcends the trappings of office and the transient nature of political power.

According to him, Nigeria owes a great debt to Shonekan, the peacemaker, who even at the twilight of his life-time never stopped believing and working for a prosperous as well as a democratic country.