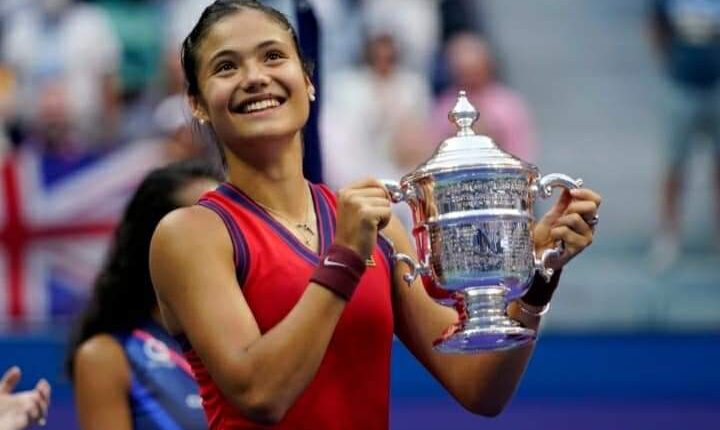 British teenage tennis player, Emma Raducanu, has won her first grand slam title after she defeated Canadian opponent, Leylah Fernandez, in a straight sets at the US Open final and broke a 44 years jinx in the country’s tennis history.

Raducanu, who completed a spectacular run at Flushing Meadows’ first all-teen final since 1999, became the first British woman to win a Grand Slam since Virgina Wade in 1977.

Aside from that, the 18-year-old became the first qualifier, either male or female, to make the final and won the last grand slam of the calendar year without dropping a set all through the tournament.

With the victory, the teenager, who came to the tournament ranked 150 would be moving to the 23rd position on the global ranking and further becomes the British number one female tennis player.

Raducanu, who repelled a brief rally by Fernandez in the second set to take the title, twice needed just one more point to win it all after taking the lead at 5-2.

The Canadian tennis player, meanwhile, fought back each time, and eventually won the game to make it 5-3, extending the time at the final match.

Then at 5-3, Raducanu skinned her knee in a lunge on the baseline during a point that left her 30-40 behind in the game.

After a medical timeout to tend to the bleeding knee, the serving Raducanu stormed back from break point to take the game and the championship.

Speaking after the game, the British sensation described the match as a difficult and great encounter that indicated the skills her opponent had.

While congratulating the Canadian, she said: “It was an incredibly difficult match, but I thought the level was extremely high. And I hope we play each other in many more tournaments and, hopefully, finals.

“Staying in the moment, focusing on what I had to do and my process and the mindset just really helped in those tough times,” she added.

Raducanu, born to a Chinese mother and a Romanian father, had to go through three rounds of qualifying to even make the main draw for what is only her second grand slam appearance.