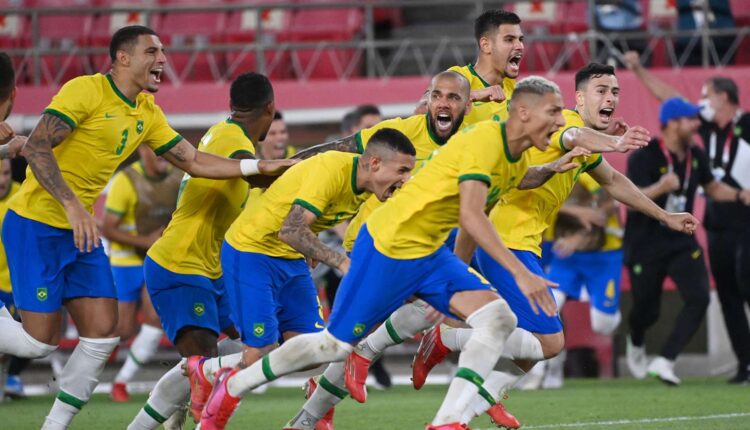 The Brazilian football team has defeated Spain 2-1 to win gold at the 2020 Tokyo Olympics and ​became the first country to retain the title won at a previous event during Rio Olympics.

Although, Brazil emerged winner of the football event after they edged out Spain through an extra-time strike by former Barcelona forward, Malcom, who became the South American nation’s hero.

The Brazilians on Saturday took the lead 12 minutes from time and defended it to avoid a repeat of what they suffered at the 61st minute when Mikel Oyarzabal’s volley cancelled Matheus Cunha strike recorded during the first half.

Spain, with the likes of Real Madrid playmaker, Marco Asensio, and Barcelona midfielder, Pedri, pulled strings earlier during the game played at Nissan International Stadium in Yokohama, Japan, but they could not convert their chances against the Brazilians.

They were, however, stunned by a contentious penalty call at about 38 minutes of the game after Cunha collided with the Spanish goalkeeper, Unai Simon, when competing with a cross whipped into the box.

The referee, Chris Beath, had earlier awarded with a free-kick initially against the Brazilian, but the match officials were, however, encouraged to review the scene.

After a thorough check of the contact between both goalkeeper and player, the Australian referee decided that a spot-kick should be the eventual outcome, but the advantage was blown away by Everton of England forward, Richardlison, after he blazed his effort high over the crossbar.

Inspite of the miss, Brazil continued with the same tempo during the game and were, however, rewarded two minutes into stoppage-time when Dani Alves kept the ball alive at the back post, sending a crossing to Cunha to produced a composed finish.

As part of the effort to turn the game around, the Spanish coach, Luis Fuente, made changes at the interval and found a way back into the game just past the hour mark when Oyarzabal struck a stunning volley that rattled the Brazilian goalkeeper, Aderbar Santos.

Oyarzabal, who plays as a forward for La Liga club, Real Sociedad, was picked out at the back post after escaping his marker and sent an acrobatic scissor kick fizzing into the net.