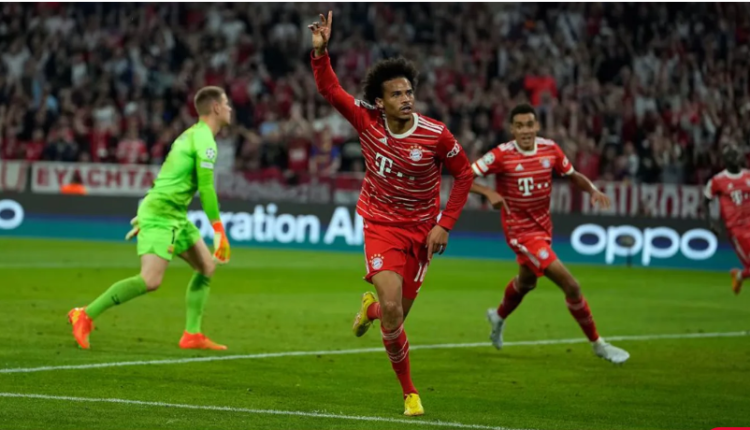 Bayern’s defender, Lucas Hernandez, and the German forward, Leroy Sane, ensured that the Spanish team led in attack by Robert Lewandowski, did not have any opportunity to score before the referee signaled the end of the match.

The German team, after a silent first half, scored both goals in the 51st minute of the game and increased the tally to three minutes after to put Barcelona manager, Xavi Hernandez, under pressure considering the number of transfers made to boost the club’s trophy chances this year.

The game had been billed as the Robert Lewandowski show which, given that it was his first time back at the Allianz Arena since leaving Bayern for Barca in July, was to be expected.
He had numerous chances in the first half but failed to convert them, heading over the crossbar, volleying over one-on-one, forcing an improvised save from Bayern goalkeeper, Manuel Neuer, and then, much to his frustration, threatening to score once more only to be denied by an acrobatic block from Noussair Mazraoui.
Lewandowski’s misses aside, Barca had the better of a frantic opening 25 minutes with Gavi, Pedri, and Raphinha also going close. Gavi, in particular, was excellent in midfield, allowing the visitors to set the tempo.
Having weathered a spell of almost unbearable pressure, Bayern showed tentative signs of improvement as half-time approached. While they continued to make mistakes, not least when Neuer had the ball at his feet, Jamal Musiala and Leroy Sane gave them some impetus, with the latter teeing up Marcel Sabitzer for a shot that whistled past the upright.
Barca made a fast start to the second half, Raphinha firing just wide from the edge of the area. They conceded against the run of play, however, after half-time substitute Leon Goretzka, on for Sabitzer, had forced Marc-Andre ter Stegen to palm away a fierce drive from distance.
From the ensuing corner, Lucas Hernandez ghosted in ahead of Marcos Alonso to meet Joshua Kimmich’s clipped delivery and nod in at the near post. Barca were rocked back on their heels and, suddenly, their opponents seemed to be everywhere.
Not long afterward an excellent passing move ended with Musiala slipping through Sane as he ran off his shoulder in midfield. His pace took him one-on-one with Ter Stegen and he slid the ball calmly into the back of the net.
Barca had plenty of opportunities to get back into the game but, just like in the first half, they failed to take them. The best chance fell for Pedri when he skipped clear in the box and dinked over Neuer, only for the ball to glance the post and bounce away.