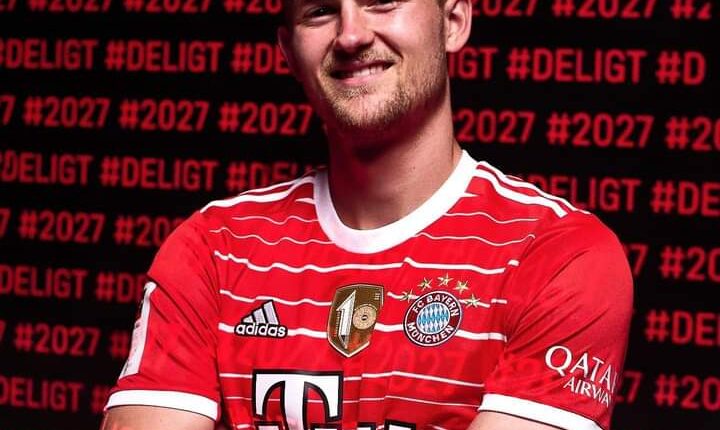 The German football champion, Bayern Munich, has signed a 22-year-old Dutch international, Matthijs de Ligt, from Juventus for a duration of five years at £68 million.

Before Bayern secured his signature, the Netherlands international had been a Chelsea target this summer but opted for the German champions after considering his chances with the English club outfit.

The Dutch defender completed his move to Bavaria, the community hosting Bayern, on Tuesday after undergoing a medical exercise to ascertain his level of fitness ahead of the new season.

A breakdown of the fee showed that the German record champion would pay an initial £59.5 million plus a further £8.5 million in add-ons to the Italian giant for services of the young defender which would elapse on 30 June 2027.

Confirming the contract agreement, the club, through a statement released by the club on its official website, disclosed that the Dutchman would be wearing No. 4 jersey which was worn last season by Niklas Sule, who has since left for Borussia Dortmund.

In an interview with newsmen, Matthijs de Ligt stated that the club’s approach particularly and the atmosphere at the club attracted him to consider Bayern ahead of other suitors.

“I’m very happy to become a player for this great club. FC Bayern is the most successful club in Germany, one of the most successful clubs in Europe and in the world. I felt genuine appreciation from the sporting management, the coach, and the board right from the start, which convinced me. On top of that, FC Bayern is a brilliantly run club with big aims. I’m very glad that I’m now becoming part of the FC Bayern story.”

Speaking on Matthijs de Ligt’s arrival, Bayern’s president, Herbert Hainer, said: “Matthijs de Ligt was a top target for us. With signings like this, the big aims that we have are achievable. The future face of our team is increasingly taking shape, and this transfer is an important building block in the overall concept that we’re gradually putting into place. De Ligt should become a mainstay at FC Bayern.”

Also, Bayern CEO, Oliver Kahn, said: “Matthijs de Ligt has impressed at the highest international level, not just with his technical qualities but also as a character who leads in all his teams.

“At a young age, he’s already learned about taking responsibility. A strong team doesn’t just require a strong attack, and with this signing, we’re really raising our defense to the top level.”

The club’s board member for sport, Hasan Salihamidzic, added: “I’m very happy that Matthijs de Ligt will be playing for FC Bayern in the future. We wanted to bring Matthijs to Munich three years ago; we were already convinced by his qualities as a defender back then, and today we’re even more so. With his professionalism, his hunger, and his wonderful character, Matthijs fits in with our team and our ambitions.

“He’ll take on an important role at FC Bayern on and off the pitch. He was already a leader as a youngster at Ajax, and at 22 he’s still capable of developing at the high level he’s at”, he added.

Before joining Bayern, he had a total of 117 competitive appearances with 13 goals, celebrated the double of the league and cup with Ajax in 2019, and left Juventus in Serie A.

He lifted one league title, one cup, and one Italian Super Cup with Juventus. He moves to Bayern after 117 appearances and eight goals in all competitions. At the international level, de Ligt has 38 senior caps for the Netherlands and two goals.

It would be recalled that De Ligt joined the Ajax academy at the age of nine and made his professional debut for the Dutch record champions in 2016 at the age of 17, scoring his first goal in the same game.

In general de Ligt has been an early starter: among other things he’s the youngest captain in Ajax’s history to date and the youngest debutant for the Dutch national team since 1945.

JUST IN: Fire wrecks over seven trucks during tanker explosion in Lagos