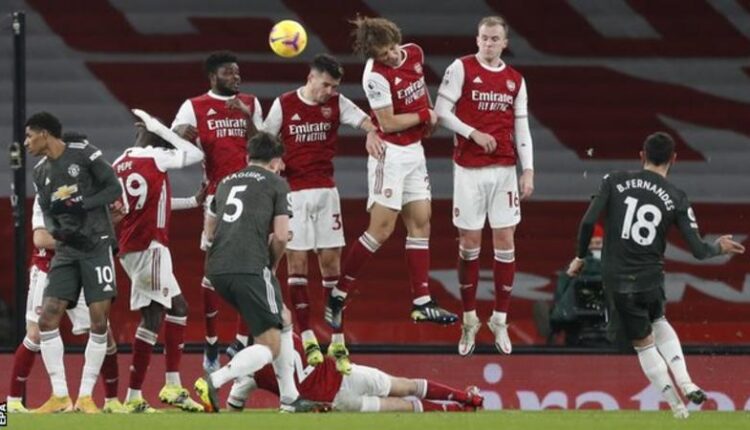 An English football team, Arsenal FC, has held Manchester United to a goalless draw during Premier League game in spite of missing some of its major players including the Gabonese striker, Pierre-Emerick Aubameyang.

The draw further lifted Arsenal to the eighth position on the league table and caused their opponent, Manchester United, to drop more points for the third time in four games since the second half of the season.

Following the draw on Saturday, United remain unbeaten in the league away from home while Arsenal extended their unbeaten run to seven top-flight games and have earned five clean sheets in the last six league matches.

With this result, Manchester United was left with 40 points and trailed their city rivals, Manchester City by four points after the Pep Guardiola team defeated Sheffield United 1-0 at Ethihad Stadium, their home ground.

Manchester Utd forward, Fred was denied by Arsenal keeper, Bernd Leno, fine save while Edinson Cavani went close in the closing stages for the visitors. But Arsenal arguably carved out the better chances, Alexandre Lacazette going closest for the hosts when he hit the bar from a free-kick.

The under-strength Gunners – without the injured Pierre-Emerick Aubameyang, Kieran Tierney and Bukayo Saka – finished with a new loan signing Martin Odegaard on the pitch but could not find a breakthrough.

United, who lost midfielder Scott McTominay in the first half to a stomach illness, remain second in the table but are now three points behind leaders Manchester City, who have a game in hand over their rivals.