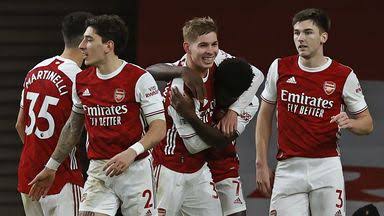 At the close of the Boxing Day game, the victory lifted Arsenal up to 14th place on the current standing and six points clear of the relegation zone, while the defeat led to Chelsea dropping down the ladder to the sixth spot on goal difference.

The road to picking up their first Premier League win since beating Manchester United 1-0 on November 1 started after Kieran Tierney won a soft penalty for a push by Reece James and Alexandre Lacazette slotted home the spot-kick to open the scoring on 34 minutes.

After the first goal, Granit Xhaka then answered his critics after being stupidly sent off in a 1-0 defeat by Burnley earlier this month with a brilliant free-kick to double Arsenal’s lead just before half-time.

A third consecutive away loss for Chelsea further damages their chances of competing for the title and there was no way back for Frank Lampard’s men once Bukayo Saka chipped in off the inside of the post 11 minutes after the break.

As part of the strategy to salvage the game, Chelsea manager, Frank Lampard, brought on Kai Harvetz, Callum Hudson-Odoi, and others to address the issues, but their contribution could only reduce the deficit suffered on the night.

During the game, England striker, Tammy Abraham, did pull a goal back five minutes from time and Chelsea could have set up a grandstand finish in stoppage time, but Jorginho’s penalty was saved by Bernd Leno.