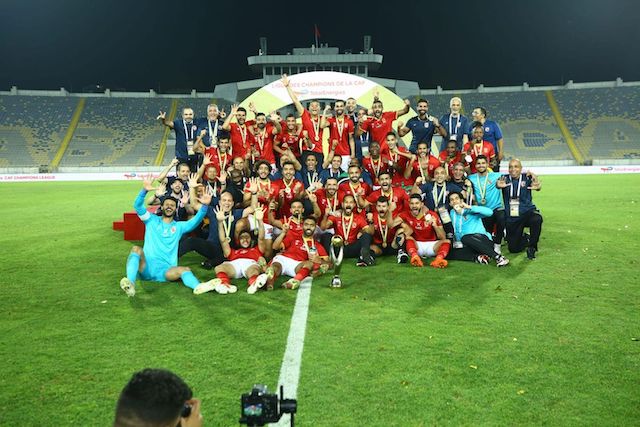 With the victory recorded against the South African team, the Egyptian club has extended their all-time record on the tournament to 10 trophies and would be representing Africa at this year’s World Club Cup tournament holding later in the year.

During the game played at the Stade Mohammed V on Saturday in Moroccan economic capital, Casablanca, Kaizer Chief player, Happy Mashiane, was shown the exit door at the 45th minute of the game over a wrong tackle on the opponent.

Eight minutes into the second half, 53 minutes, the South African club conceded their first goal after the defense led by its Nigerian goalkeeper, Daniel Akpeyi, could not intercept their Egyptian opponent passes, allowing Mohamed Sherif to slot in the opener.

Taking advantage of the Kaizer Chiefs number, the Cairo side doubled their lead through Mohamed ‘Afsha’ Magdy before Amr El Solia cracked home Sherif’s clever backheel to increase the tally to 3-0.

Ahly’s tally of ten African crowns is now double that of their nearest challengers, with city rivals Zamalek and DR Congo’s TP Mazembe both tied on five apiece.

Following the win, Al Ahly’s coach, Pitso Mosimane, moves on to an impressive three Champions League titles, with the Egyptians defending the trophy they won last year while his initial, and arguably greatest, triumph came with Mamelodi Sundowns in 2016.

One of his more unusual successes, since it came against the very team he supported as a boy, made him only the second Al Ahly coach to conquer Africa two years in a row, after Portugal’s Manuel Jose in 2005 and 2006.

Fittingly given his recent fine form, it was Sherif who made the breakthrough in Casablanca’s Stade Mohamed VI to take his tally to nine in his last eight before the forward helped wrap up the win when teeing up fellow Egypt international El Solia.

The holders came into the game as overwhelming favourites, with their record 14th appearance in the final of African club football’s showpiece event coming against a side making their debut.

Playing with new coach Stuart Baxter taking official charge for the first time, Chiefs were in the tie until Mashiane saw red – so decisively tipping the final towards the most successful club in African history.

Prior to the game, Mosimane had hinted that cutting the supply line from the flanks and set-pieces might stymy Chiefs and so it proved as the South Africans failed to find a way past Ahly goalkeeper Mohamed El Shenawy.

Ahly climb to 22 Africa titles while Chiefs still claim just the one, the now-defunct African Cup Winners’ Cup in 2001, but after finishing eighth in the league, some 31 points behind champions Sundowns, reaching the final was a success in itself.

Al Ahly, meanwhile, roll on and will hope to impress at the Club World Cup in a similar fashion to 2020 when they beat Palmeiras of Brazil and took the game to European champions Bayern Munich in an impressive semi-final defeat.

Prior to that, El Shenawy and five Ahly team-mates have more football to play as they head off to Tokyo ahead of Egypt’s Olympic participation later this month.