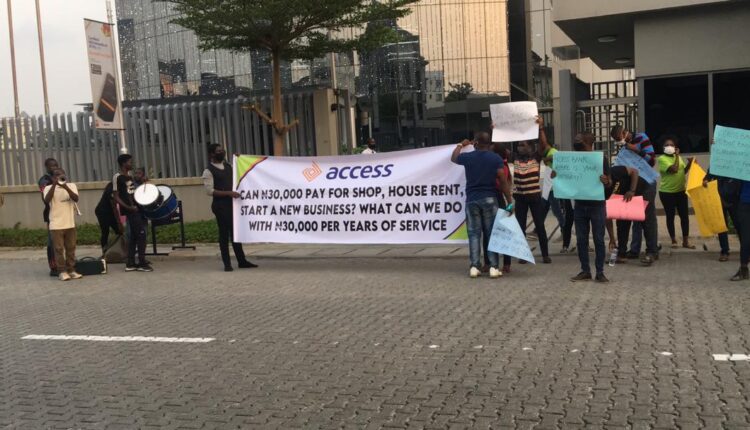 Activities at the Access Bank headquarters premises in Lagos State were on Wednesday affected when dozens of former workers stormed the entrance of the financial institution to demand complete payment of their entitlements.

The protesters, who claimed that they were sacked by the bank after the country was hit by an outbreak of coronavirus pandemic, were reported to have arrived at the bank premises for the demonstration, alleging non-payment of their benefits.

As gathered, the staff were retrenched by the management even after Federal Government directed that none of the banks should lay-off staff to prevent an increase in the unemployment ratio across the country.

The ex-workers, who were armed with placards and a large banner, claimed that the bank has the financial strength to pay but had just refused to  fulfill expected agreements.

Speaking on behalf of the protesters, Abiola Ojo, in an interview with The Guild, lamented that the bank dismissed them when they less expected and that inspite of the apex government intervention. 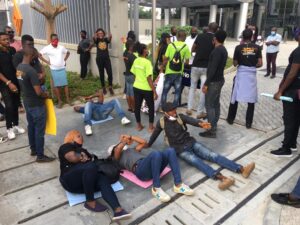 Ojo added that after 1,000 workers were retrenched, prompting the government intervention, other staff were sack one after the other on menial claims that did not warrant the decision taken by management.

After the retrenchment, Ojo noted that after much plea, the management argued that rather than the workers getting the normal entitlement, it decided that N30, 000 would be paid to each worker for each year spent as a staff of the financial institution.

According to him, So under this arrangement, each of the affected staff benefits would be determined by the number of years spent with the bank.

He said: “We have started receiving the N30, 000 but we have rejected this arrangement and we have asked that they pay us the standard benefits stipulated under the labour laws”.

“We believe that the money was not enough considering the number of years that we have put into the job. This money cannot do anything in the country. 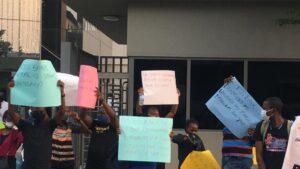 “We are demanding that they should pay us the right entitlement and this should be determined through negotiation with the representatives of the affected ex-workers”, Ojo added.

Reacting over the issues raised by the aggrieved ex-staff, a top senior staff of the organisation disclosed that the company was more concern over their welfare than anyone and was already meeting with Association of Senior Staff for Banks, Insurance and other Financial Institutions (ASSBIFI) and other labour unions to address their demands.

He added that when the negotiation is finalised, the bank would inform the public, saying, I can assure you that as soon as possible, they will hear from the bank. 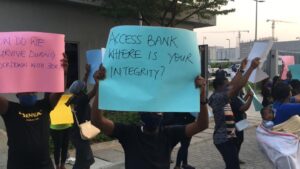