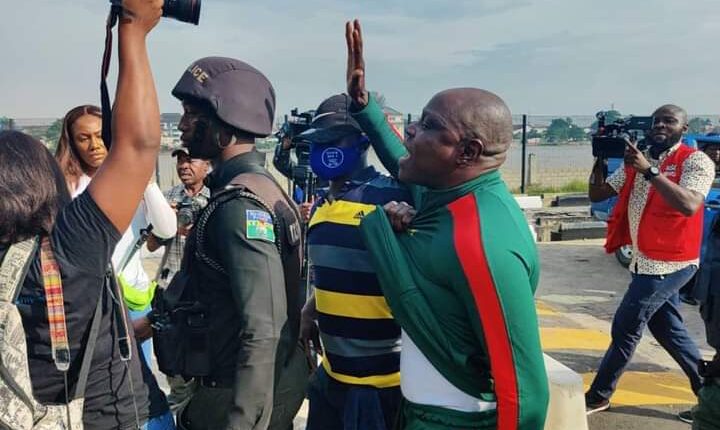 The Nigerian Police, Lagos Command has released atleast 33 youths that participated in the demonstrations marking the first anniversary of military officers’ alleged killing of peaceful protesters at Lekki tollgate and other brutalities perpetrated by security agencies on innocent citizens in the country.

Of the 33 released by the law enforcement agency, 26 were said to have been picked at the Lekki Tollgate while seven others were apprehended by security agencies around Onikan axis of the state.

As gathered, the protesters were set free by the law enforcement agency at about 12 am on Thursday, following the intervention of the State Governor, Babajide Sanwo-Olu, and their lawyers, Adesina Ogunlana, Ayo Ademiluyi and Festus Ogun.

Meanwhile, the police did not release a youth that was apprehended at the protest ground after he was found with a machete and charms that were alleged to have been brought along to the tollgate basically to cause trouble.

Speaking on their release at a stakeholder meeting on housing in the state, Sanwo-Olu explained that the police could not release the youth found with a machete, as they claimed that there was need to investigate him further.

The governor, however, appealed to the protesters to remain calm and await the submission of the report expected to be submitted by Justice Doris Okuwobi (retd) panel, saying I can assure you that the report will be made public.

He added that all details of the report including recommendations made by the panel would be made public for all Lagosians to read and decide.

“The government will not shy away from its responsibilities, even though the challenge may be tough, we will face it with all that we have. It is important for me to mention that we set up a panel after the protest last year. And as you all are aware, the panel has concluded its sitting about three days ago and they have asked for time to put their report together.

“And we have granted them that request. We do not idea of what the outcome of that report would be but we must say here publicly that we will make the report known to everyone, We are not going to cover anything. That is not who were and what our government stands for as well as what we belief government is all about. We will make full disclosure of the report including recommendations and others. I want to assure you all that we will not leave anything to chance on it.

“We saw some protests in Lagos yesterday and some people were arrested. But I want to tell you here that all those that were apprehended by the law enforcement agency have been released except for one person that was caught with dangerous weapons. And he indeed confirmed to the Nigerian Police that he was at the scene to cause mayhem”, he added.

Earlier, the Radical Agenda Movement of the Nigerian bar Association (NBA) has through a stateent made available to newsmen, narrated how the protesters regain freedom and return to their various homes.

The statement reads: “Indeed struggle pays as CP HAKEEM ODUMOSU, the Commissioner of Police of Lagos State bowed to pressure and released 33 peaceful protesters arrested at the Lekki Toll Gate. The “Lekki 33” , as additional 7 persons were brought from Onikan to join the Panti 26 , were eventually released by 12pm midnight, 20th October, 2021.

“All appreciation to esteemed comrades and well wishers who mounted pressure on the Commissioner of Police”, it added.