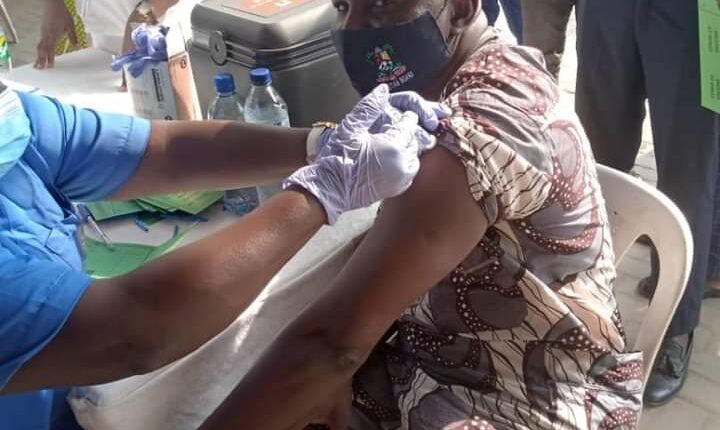 A journalist with a Nigerian online news medium, Kazeem Ugbodaga, has narrated his bodily reaction after receiving a dose of the AstraZeneca vaccine, describing the pains and other experience with the vaccine produced to flatten coronavirus curve globally as unforgettable.

Ugbodaga added that hours after receiving a jab of the vaccine, his body began to experience pains that have made him inconvenient and that the pains were yet to subside 24 hours after.

The journalist narrated his experience on Saturday after joining the State Governor, Babajide Sanwo-Olu, his deputy, Dr. Obafemi Hamzat, and 98 other Lagosians to receive the vaccine at the Infectious Disease Hospital (IDH), Yaba.

He disclosed that inquiry from his colleagues, who also received the vaccine after the governor, proved that they were also battling with one side effect or the other after taking the dose.

Ugbodaga, in a statement titled: ‘A ’hellish’ night with AstraZeneca vaccine: A reporter’s experience, noted that he wrote the statement in pains 24 hours after receiving the vaccine.

“I wrote this article with body pains, tiredness, and headache yet to disappear. So if you want to take AstraZeneca vaccine, take note of the side effect, which I learnt will disappear in few days’ time”.

He listed other side effects expected to be experienced after receiving a dose to include pain or tenderness at the injection site, tiredness, muscle or joint aches, fever, chills, and nausea.

Ugbodaga, meanwhile, disclosed that he was cautioned by his wife not to receive the vaccine but that he shrugged off her comment after watching Sanwo-Olu take the jab without any effect, saying, the fear vanished immediately.

According to him, with a couple of journalists, I took the first dose of vaccine. It was not painful, there was no reaction, I was joyous that I was among the first 100 people to take the vaccine in Lagos.

After receiving a dose of the vaccine, Ugbodaga resumed work and did not take his hands off the computers until past 1.00 am when he started feeling dizzy.

“At this time, I was also feeling pains that I had not felt before. Shortly after I hit the bed, sleep vanished, I was praying, “Lord, give me sleep.” My prayer was answered and I slept. I was rudely jolted out of sleep a few minutes later with serious shivering I never felt before. I took the bedsheet and wrapped myself in it, but I was shaking like a leaf.

“Asides from the shivering, internal temperature sets in. My whole system was aflame, I woke up my wife and said “dear, touch my body, is it hot?” She said “no.” But I could feel a hell of flame within me.

“The temperature accompanied with sharp body pains. I could not sleep, pains, temperature, headache, and chill set in. Later in the night, the internal temperature found its way out, my body was hot outside. I held my wife and she screamed because of how hot my body was”, he added.

Ugbodaga further narrated that at this time, it became obvious that he would be embarking on a vigil, accompanied with pains, that he was not prepared to participate in.

“I had a hellish night, sleep later came early in the morning, I slept till past 1.00 pm on Saturday, but the headache and pains did not disappear but the temperature was gone.

“I called my other colleagues who took the vaccines to inquire if they felt the same way I was last night. The story was the same with slight variation. It was the side effect of AstraZeneca vaccine which we were not told”.