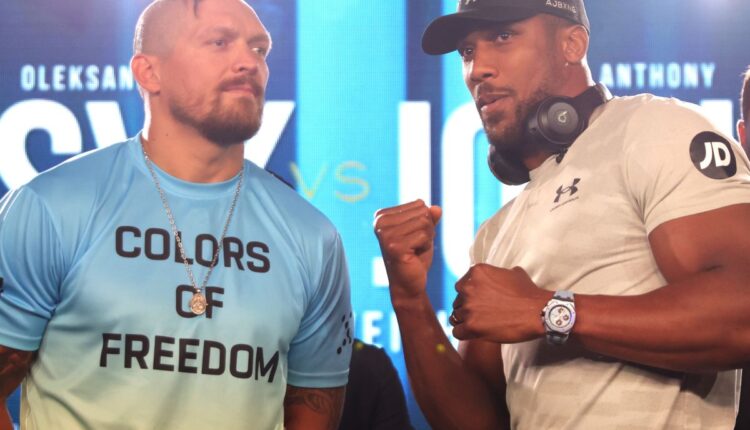 Thriller in Manila ended Joe Frazier’s boxing career and confirmed Muhammad Ali as the greatest of all boxers. The journey to the match enjoyed media hype with Ali visiting places to tell the world how and what he would do to spoil the records of smoky Joe. He did after 14 rounds of intense boxing in Manila, US.

Just as Ali did in “Rumble in the Jungle in far away Zaire when he retired George Foreman by knockout against the prediction of the boxing world. Thriller in Manilla is a trilogy and it is also a match that turned Ali into a three-time heavyweight champion.

In about 48 hours, our own Anthony Joshua will be fighting against Olesandr Usyk to become a three-time heavyweight champion. This match will happen in Jeddah, Saudi Arabia and it is tagged, “Rage on The Red Sea”.

There have been various reports but none of the two boxers have replicated the aura that Ali, Frazier and Foreman brought to boxing despite social media life that has permeated the global media space.

Usyk is a man of few words, Joshua who can speak has been so choosy in his use of language. Joshua looks threatened by the composure of Ukrainian boxer.

This was obvious in their faceoff. Joshua irritates me sometimes with his too much respect for Usyk. During one of his interviews he said that he would have killed Usyk if not because the Ukranian was a southpaw. This is a statement of defeat, which Usyk would capitalize on.

For God’s sake, Joshua is a big guy and if he must win this match, he must go into the ring to show Usky that heavyweight division is for big boys, former Undisputed Champion, Evander Holyfield has said.

Holyfield, whom himself held the record of holding undisputed cruiserweight and heavyweight belts was a Nightmare to many opponents in his era.

He conquered two divisions despite his small size but was quick to add that there were big guys in the heavyweight who used their reaches and size to take him out.

One of them is Riddick Bowe who used both skills and size to beat Holyfield twice and is the only man to have knocked out the “Raw Deal”. Lennox Lewis also did the same despite the bravery and courage of Holyfield.

Usyk may not have the fighting spirit of the “Raw Deal”, he has got the mind to stand his feet against any opponent in this division at present. That is why Joshua must impose himself on him on Saturday by not allowing the Ukranian’s jabs to touch him.

As Iron Mike Tyson put it, “Americans are showing much respect to Joshua. It seems they love him and how he takes care of Usyk’s jabs will define the outcome of Saturday’s match. He’s got big punches no doubt but Usyk is too mobile and faster than Joshua.”

Of course Joshua wants to win his belts back, judging by his statement, “In Sha Allah” I will win by knockout as he spoke with a journalist in Saudi Arabia.

Let’s see how things will be. Wishing Joshua a glorious rage on the red sea.

Kunle Awosiyan is a journalist based in lagos