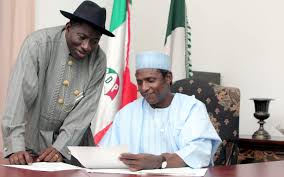 Former Nigerian President and Presidential candidate of the People’s Democratic Party (PDP), Goodluck Jonathan, has eulogized the nation’s late 13th President, Umar Musa Yar’Adua, on occasion of the tenth year anniversary of his death, saying that the deceased had lived and died for Nigeria.

Jonathan described the late leader as a selfless, modest, and exceptional president, and said that Yar’Adua had built national hope, love, and unity for which he would be fondly remembered by Nigerians.

The former president stated that Yar’Adua, during his lifetime, had worked to strengthen positive change across the nation while building fault lines and strengthening the bond of the Nigerian people.

Jonathan, through a post released on his social media page on Tuesday, revealed that the late President had left a legacy to his successors on the reinforcement of national unity as well as positive change and that Yar’Adua’s devotion for democratic ideals were commendable and worthy of emulation.

He said that the late leader had been a great proponent of human rights and freedom, as well as the commitment to rule of law, equity and justice, and added that the exemplary life led by Yar’Adua would long be remembered in the Nigerian polity.

“It has been a decade since His Excellency President Umar Musa Yar’Adua was snatched by the cold hands of death. On this day, every year, his image fills our consciousness as a mark of his selflessness, typical modesty, and exceptional flair. He was a President like no other who lived and died for the sake of his country,”

“He stood on the side of the people, toiling day and night to make their lives better. President Yar’Adua built strong bridges of hope, love and understanding for which he became a force for national unity and positive change across our blessed land. In many ways he stood out. He had an accommodating spirit and enormous goodwill that secreted a web around our national fault lines to strengthen the bond; thus leaving for his successors the task of reinforcing the band,”

“President Yar’Adua no doubt left enduring legacies in his wholehearted devotion to the ideals of democracy, respect for peoples’ rights, freedoms and reason for living as well as the commitment to the rule of law and laws of equity and justice. I will continue to remember President Yar’Adua as a colleague and boss who became my brother and friend”.

It has been a decade since His Excellency President Umar Musa Yar'Adua was snatched by the cold hands of death. On this day, every year, his image fills our consciousness as a mark of  his selflessness, typical modesty and exceptional flair.

Alma-matter of the late President, Yar’Adua, Ahmadu Bello University (ABU), also gave tribute to the late leader on the tenth anniversary of his death, saying that the institution’s foremost alumnus was remembered for the contributions made to the nation during his lifetime.

It said that the deceased had remained committed to the ideals of democracy and concern for the common man up till his death and that Yar’Adua lived a life that embodied respect for human rights as well as a commitment to the rule of law and justice.

President Umaru Musa Yaradua, One of our foremost Alumnus died on this day, 10 years ago.

His devotion to the ideals of democracy, concern for the common man, respect for peoples' rights and commitment to the rule of law & justice will always stand Him out. pic.twitter.com/O3wOa1ZPHb