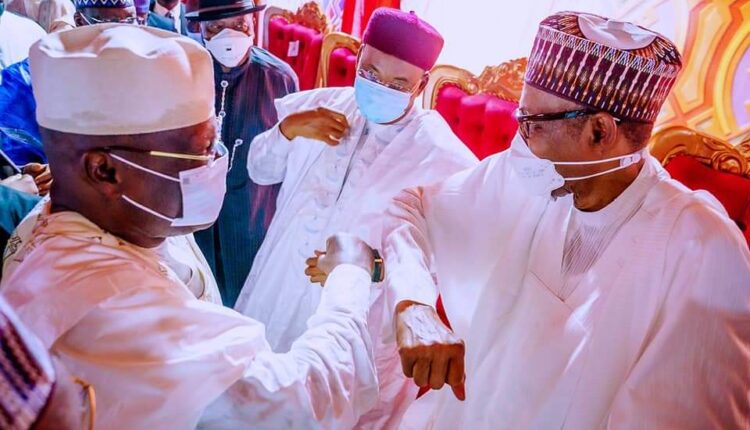 The immediate past President, Goodluck Jonathan, and ex-Vice President, Atiku Abubakar, and Chairman of the Nigerian Governors Forum (NGF), Kayode Fayemi, led hundreds of dignitaries including lawmakers and captains of industries that attended the wedding (Nikkah) of President Muhammadu Buhari’s son wedding in Kano.

Also present at the wedding between the son of the president, Yusuf, and Zahra, daughter to the Emir of Bichi, Nasir Ado-Bayero, were the Vice President, Prof. Yemi Osinbajo, Nigerien ex-President, Mouhamadu Yesuofu. 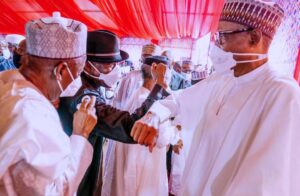 The presence of the dignitaries increased traffic flow at the Kano International airport with many of the guests arriving the state in their private jets and took over the runway at the airport.

Also, during the ceremony, the dignitaries were seen to have flouted coronavirus protocols put in place by the Federal Government to prevent the person-to-person spread of the deadly virus.

The president and other invited guests were seen violating the Coronavirus Disease Health Protection Regulations (2021) that he signed into law earlier in the year.

In a video clip released by his Special Assistant on Digital and New Media, Bashir Ahmad, after the wedding, the guests were not maintaining physical distancing and were more than the stipulated number approved by Presidential Taskforce on Coronavirus for social gatherings within an enclosed area.

The violation was coming after a month the president removed his protective mask at a dinner with members of the National Assembly, held at the State House Conference Centre, Abuja, days after the Nigeria Centre for Disease Control (NCDC) confirmed a case of Delta COVID-19 variant in Nigeria.

Before the president’s arrival to Kano, he had already dispatched a high-level delegation for the wedding led by his Chief of Staff, Prof. Ibrahim Gambari.

The Guild had earlier reported that hundreds of youths, artisans, traders, and others occupied major roads leading to Bichi in Kano State ahead of the first-class wedding ceremony.

Aside from those that occupied both sidewalks leading to the wedding venues, scores of entertainers stationed at different locations, displayed their skills to hundreds of people waiting to catch a glimpse of dignitaries that would be attending the event.