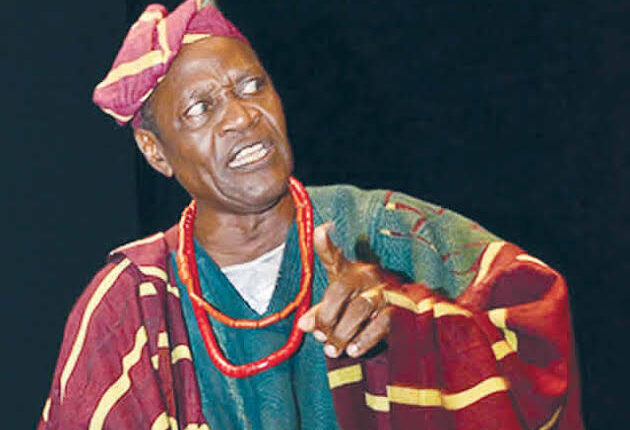 Born July 4, 1942, Olujimi Solanke, a native of Ipara Remo, the Baba Agba, African culture ambassador extraordinare, trained at the University of Ibadan , School of Drama and began his professional acting career in 1961 as one of the pioneer members of the Orisun Theatre Group founded by Wole Soyinka. His father, Alfred Tayo was a chief in Remoland like his grandfather. Both were Lisa, next person to the Paramount ruler, reason Jimi’s middle name is Adeboye.

His seven decades , as veteran of varied exposures, experiences and impacts in the global entertainment industry resonate in many broadcast stations, countries and festivals. His epic performances at the Western Nigeria Television, WNTV, Ibadan in the 1960’s; to his stunning presentations and amazing stagecraft in Senegal at the World Festival of Negro Arts and Algeria for the Pan – African Cultural Festival in the 1970s attest his hot passion and theatrical brilliance. He has featured in great epics like Death and the King’s Horseman, Kurunmi, Kongi’s Harvest, The Divorce and Ovaramwen Nogbaisi, a performance that turned him into an immediate resident of Benin City for five years on royal.

Described in 1970, while on tour of Europe by the Oxford Times, as a “Skilled Nigerian Actor” and by the New York Times as star of an “Excellent Troupe” in the Performance of Wole Soyinka’s Kongi’s Harvest. Baba Agba, as he is fondly called is recognised as “a better singer than actor”. He however sees himself entrenched in both and calls himself an ” actor – singer ” because ” when I sing, I act and when I act, I am musical in delivery says Baba Agba.

For fact , he is a consummate quintessential songwriter, actor, performer, visual artist, poet and storyteller extraordinare. With his booming endowment ( Gift of Voice) , Baba Agba rings out folktales in enchanting sonorous voice backed with gesticulations and mimicry to pass messages. He sings at different golden tones passionately. His voice is discerned with enthused acknowledgement. When he dances, his whole body is taken into creative expressions.

Today @80 he says “my fear with dance is that the bones inside my body are already complaining, so, I dance like an elder”. He selects the songs he sings, chooses roles he played and does not believe in counting them.

He characteristically holds audiences captive in Africa, Europe, America, Asia and the Middle East. He set the Cranston Hall , Us on