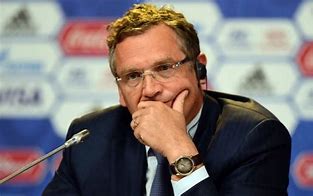 As gathered, Valcke was arraigned alongside BeIN Media Group Chairman and Paris Saint Germain President, Nasser Al-Khelaifi, and another person whose name is kept from media, said to be a business man, and both of which were charged with inciting the FIFA former secretary to the crimes he was being charged for.

The Swiss Attorney General’s office (OAG) disclosed that  alledged crimes had been committed in connection with award of media rights to various World Cup and Confederations Cup tournaments which had happened while Valke was secretary general to the football governing body.

Speaking through a statement released on Thursday, the Attorney General’s office said that gravity of the alledged crimes were such as could not be ignored, and explained that as the involved parties had been charged accordingly, it was pertinent to allow law run its full course.

It added that alledged actions of the three accused had given undue advantage to those from whom bribes had been received, and also resulted in huge losses due to gross mismanagement of FIFA funds.

The OAG hinted that several investigations were still ongoing and that major evidences had been unearthed to support the charges which had been laid against Valcke, Al-Khelaifi, and their third cohort.

“We intend for this matter to run full course of the law, and also have unwavering trust in our legal sysytems that justice will be served at the end of the day”.

FG to partner Lagos on tourism, design Nigeria for attraction