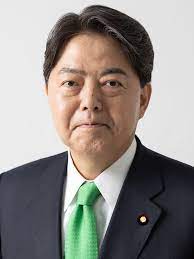 Following the wide spread of Covid-19 virus all over the world, the Japan foreign minister, Yoshimasa Hayashi, would be undergoing quarantine at home  till June 11, for  contracting the  deadly disease.

The minister was said to  have felt pain in his throat when he went to the ministry to  take the polymerase chain reaction (PCR) test to know his status of the coronavirus after which he was detected of the symptoms.

As gathered, Hayashi who is only experiencing mild symptoms of the virus, has been put behind close doors at home, from associating with people in the ministry, to avoid further spread of the virus.

According to officials on Wednesday, disclosed that the Japanese Foreign Minister, Hayashi, was tested positive for COVID-19 on Wednesday and would recuperate at home until at least June 11, 2022.

Earlier, Hayashi have had talks with North Macedonian Foreign, Minister Osmani, on Monday in Tokyo but did not meet any other leaders or counterparts from other nations this week.

The minister had also attended a meeting between Prime Minister, Fumio Kishida and United States (U.S) President, Joe Biden, on May 23 and have had separate talks with his counterparts which includes U.S, India and Australia, on the sidelines of a Quad summit held the following day, both in Tokyo.

He had also hosted the foreign ministers of Singapore and Malaysia on May 25, and Vietnam’s standing deputy prime minister the following day.

While speaking to the press at the Foreign Ministry in Tokyo on May 9, 2022, the Minister, Hayashi, disclosed that he skipped a session of the House of Representatives Budget Committee in the afternoon and also canceled separate meetings with a group of United States (U.S) lawmakers and U.S. Forces Korea Commander, Gen. Paul LaCamera.

The number of new COVID-19 cases across Japan has been below 30,000 per day lately, compared with about 100,000 in early February when the country was struggling to contain the spread of the highly transmissible Omicron variant.