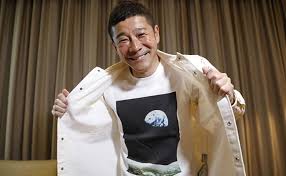 Japanese billionaire, Yusaku Maezawa, is throwing open an offer of a private lunar expedition to eight persons from around the world.

Yusaku Maezawa, an online fashion tycoon, was announced in 2018 as the first man to book a spot aboard the lunar spaceship being developed by SpaceX.

Maezawa, who paid an undisclosed sum for the trip scheduled to be launch in 2023, at the earliest, originally said he planned inviting six to eight artists to join him on the voyage around the moon.

On Wednesday, in a video posted on his Twitter account, he revealed a broader application process. He said:  “I’m inviting you to join me on this mission. For eight of you from all around the world,  I have bought all the seats, so it will be a private ride.

Maezawa, 45, said his initial plan of inviting artists had “evolved” because he came to believe that “every single person who is doing something creative could be called an artist.”

The Japanese entrepreneur said applicants would need to fulfill just two criteria: being ready to “push the envelope” creatively and being willing to help other crew members do the same.

In all, he said around 10 to 12 people will be on board the spaceship, which is expected to loop around the Moon before returning to Earth.

The application timeline for spots on the trip calls for would-be space travellers to pre-register by March 14, with initial screening carried out by March 21.

No deadlines are given for the next stages, an “assignment” and an online interview, but final interviews and medical checkups are currently scheduled for late May 2021, according to Maezawa’s website.

Maezawa and his band of astronauts will become the first lunar voyagers since the last US Apollo mission in 1972 if SpaceX can pull the trip off.

Maezawa has previously made headlines with an online ad for a girlfriend to join him on his SpaceX flight, only to abruptly cancel the hunt, despite attracting nearly 30,000 applicants.

US space agency NASA is intending to land astronauts on the moon, including the first woman, in 2024.