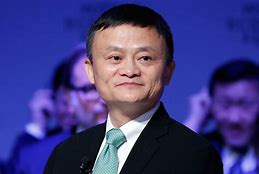 Richest man in China, Jack Ma, has revealed that he is set to donate high grade medical equipment supplies needed for prevention and curb of possible spread of the novel coronavirus to 54 African countries, and that he, through his philanthropic arm, the Jack Ma Foundation , would facilitate medical training on testing, diagnosis, handling and treatment of the deadly viral infection.

Ma explained that Africa could be badly hit by the global pandemic if adequate medical resources were not provided its countries, and that the populous continent with over 1.3 billion people, stood at a great risk if the viral infection was allowed to spread without care.

He reiterated that world health demanded that the pandemic be erased totally from all countries, and that as such, focus on Africa was necessary so as to facilitate quick and adequate response to coronavirus incidences and to aid preparations which had already been ,ade by individual governments to protect their people from the deadly virus.

Speaking on Monday through a series of tweets which were released by the foundation tweeter handle, the Alibaba boss disclosed that plans were in place to supply donations of 20,000 coronavirus testing kits, 100,000 face masks and 1,000 medical use protective suits and face shields to each of the 54 African countries.

Ma added that his foundation had partnered with the Ethiopian government which had undertaken the task of receiving the total 1.1 million coronavirus testing kits, 6 million face masks and 60, 000 medical protective suits and shields, and distributing them to each of the other African countries on behalf of the jack Ma Foundation.

While expressing his appreciation to Ethiopian Prime Minister, Abiy Ahmed Ali for his part in the African medical supplies donation, Ma called on other corporate bodies, world powers and world wealthy people, saying that they needed to join hands in the war against the deadly coronavirus.

He pointed out that the viral pandemic had held on for much longer than anyone expected, and that its toll on lives, livelihood and economy had far surpassed what anyone could have guessed, and said that such was indication that all hands needed to be on deck to curb the global threat of the virus.

“If we take it very seriously and are proactive, we will be able to contain the virus…it would be irresponsible for us to sit on the fence, panic, ignore facts or fail to act. We need to take action now!” 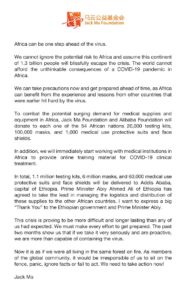