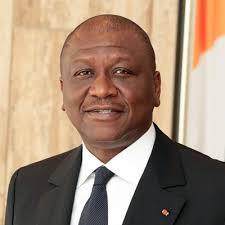 In order to avoid a vacuum in governance, Ivory Coast President Alassane Ouattara has appointed Defence Minister, Hamed Bakayoko, as prime minister after his predecessor died suddenly this month.

The death of former Prime Minister, Amadou Gon Coulibaly, threw the ruling party into disarray ahead of October’s presidential election, as he had been handpicked to run as the candidate to succeed Ouattara.

Bakayoko, a former radio and newspaper executive and longtime ally of Ouattara, has been considered a possible replacement for Gon Coulibaly as the presidential candidate, but the ruling party had formally asked Ouattara to run again.

Ouattara, who had announced in March that he would step down after a decade in office, said he would take some time before making a decision.

The 55-year-old Bakayoko has a reputation as a populist and a showman who holds rowdy campaign rallies where cash is distributed. Bakayoko will retain his position as defence minister in his new post, the statement said.