Buhari to determine next APC chairman after Govs embrace… 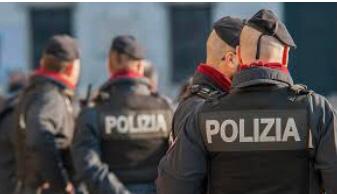 The Italian Police have arrested 30 Nigeria businessmen for allegedly engaging in cultism, drug and people trafficking, prostitution and internet fraud. It said the suspects were members of the Black Axe mafia gang operating in different parts of the country.

The arrest of the Nigerians, by the Police Force, was after it allegedly discovered the suspects engage in illegal acts, which against the country’s law.

It was learned that the arrests took place in 14 provinces across Italy, which led to the arrest of a 35-year-old man (name withheld) alleged to be the Black Axe’s leader in Italy.

The group, known to be one of the most notorious secret societies to have emerged from Nigeria. The Black Axe surfaced in the 1970s, where they carried out rape, mutilation, and ritual murders.

Those arrested were accused of using Bitcoins on the dark web to buy the details of cloned credit cards, which were used for online shopping sprees.

“The police said most of the suspected crimes were committed on the internet, alleging that Bitcoins were used on the dark web to purchase cloned credit cards, which were then used for online shopping.

“There is evidence that the members had a direct connection with the Nigerian gang, drawing on the same vocabulary, symbols and affiliation rituals.

“The Black Axe group emerged from Nigeria in the 1990s, carrying out ritual murders, mutilation and rape before developing a powerful international network,” the Italian police was quoted to have said.

It said most of the suspected crimes were committed on the Internet, including using bitcoins on the dark web to purchase the numbers of cloned credit cards, which were used for online shopping sprees.

Commenting on the incident, Italy’s Interior Minister, Luciana Lamorgese said Italy was showing its determination to tackle organised crime.
“This proves the ability of the judiciary and police forces to fight against old and new mafia groups which are trying to extend their criminal reach and expand their business,” Lamorgese said in a statement.