Osun 2022: The next hurdle for Oyetola 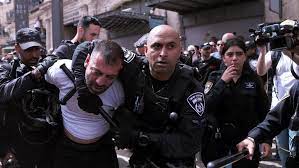 Following the death of an Al Jazeera female journalist, Shireen Akleh, who was killed in the West Bank city of Jenin, the Israeli police have rejected the release of a pallbearer, Amro Khdair, who was arrested for participating in the reporter’s burial.

It was said that during the funeral and before Khdair was arrested, he was beaten by the Israeli security officers, at a point that he nearly dropped Akleh’s coffin on the ground.

The arrest of Khdair by the police men which almost made him drop the journalist coffin evoked a widespread international condemnation by those who wear still in mourning.

Reacting to the arrest, Khdair’s lawyer, Khaldoon Nijm, said that his client was arrested on Monday but the charges were not revealed to him and were based on information from Israel’s domestic security service.

Khdair’s lawyer, Nijm also said that his client told him that he was being questioned about the Israeli police investigative department as regards the funeral.

He noted that another pallbearer who assisted in carrying the journalist coupes, on anonymity, said that he had  also been questioned by police but was not arrested.

Earlier on Saturday, the Israel’s Internal Security Minister, Omer Barlev, said  that he and the police commissioner had appointed a panel to carry out a comprehensive investigation of what happened during the funeral in order to learn lessons from the event.

Separately, the Israeli alongside the Palestinians government has began investigation to unravel the mystery behind the journalist’s death.

The Palestinians government has however accused the Israeli forces of assassinating the journalist, in which the Israeli government has denied targeting her, saying that she may have been shot accidentally by a soldier or by a Palestinian gunman as they exchanged fire in the West Bank city of Jenin.