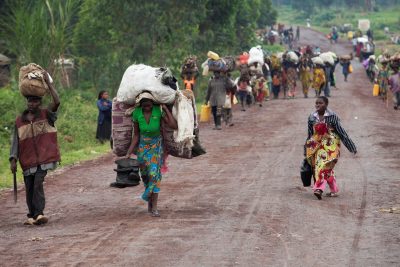 No fewer than 20 persons were said to have been killed and scores of others suffering varying degrees of injuries when members of Islamic terrorist at a rural community in Democratic Republic of Congo.

The attack, which was said to be the latest in a string of massacres in Eastern DR Congo, was said to have left many residents in the pool of their own blood in the two affected communities.

Before the massacre, United Nations (UN) had announced that about 1000 citizens of the country have been killed since 2019 after renewed attacks by Allied Democratic Forces (ADF), a Ugandan armed group, said to have been attacking the communities for over three decades.

The government on Thursday confirmed the sad event through the Administrator of Irumu Territory, Rachel Tarwayi, alleging that the victims were killed with knives and firearms, as survivors have been panicking and are already fleeing.

Also, Head of a Civil Rights Groups in Irumu, Gili Gotabo, in an interview with newsmen on the tragedy, disclosed that three village chiefs were among the victims killed by the terrorists.

Gotabo narrated that the fighters attacked the villages of Tsabi and Tondoli, communities located about 120 kilometer south of Bunia, unaware on Wednesday night, and that

Also, the UN, while reacting to the incident through a statement made available to newsmen, said that the latest surge in string of massacres in eastern region of the country could constitute war crimes.

It would be recalled that attempt by the Congolese government to wipe out the group with a large-scale army campaign has increased violence attributed to ADF since the start of the year.