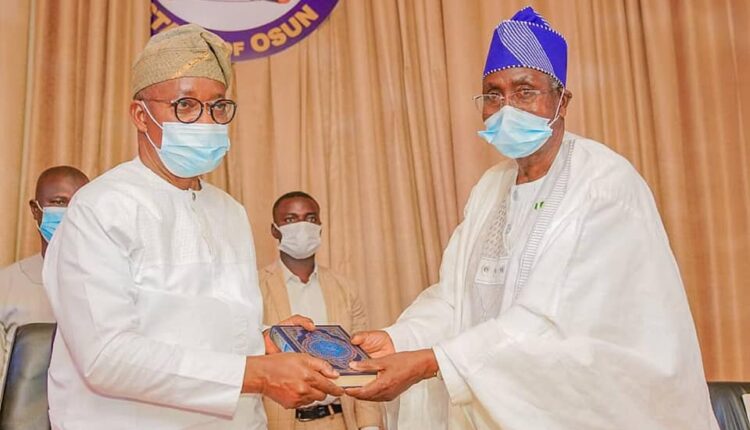 The Muslim Ummah of South-west Nigeria (MUSWEN) has commended Osun State Governor, Gboyega Oyetola, on his governance style and innovation, saying his administration has exhibited justice, fair play and equity in managing Osun’s resources and affairs in the last two years.

The Islamic group applauded Oyetola for piloting affairs of the state without trespassing into the sphere of disharmony in the guise of religion.

Speaking on behalf of Muslims in the region during a courtesy visit to Oyetola at Government House, Osogbo, MUSWEN President and Deputy President-General (South), Nigerian Supreme Council for Islamic Affairs (NSCIA), Rasaki Oladejo, said that the governor has proved his mettle as a good ambassador of Islam whose position has orchestrated innovation in governance as reflected in the management of human and capital resources of the state.

He expressed delight at the way and manner the governor has been managing the diverse residents of the state who are a mix of different ethnoreligious groups without resorting to any form of rancour or media propaganda.

Oladejo, who further commended the governor’s rightly-guided disposition to Islam, said that being the only Muslim governor in the entire southern Nigeria, Oyetola has justified his faith as a true Muslim with optimum humility, dignity, and integrity.

He assured the governor of the association’s continued support and cooperation in the onerous effort to engender peaceful coexistence, unity and harmony among the various tribes residing in the region particularly in Osun.

“Your Excellency, besides paying you a courtesy visit, as a matter of brotherhood, we are also here to further assure you of our cooperation with your government and to appreciate you for piloting the affairs of Osun State according to the law and without trespassing into the sphere of disharmony in the guise of religion.

“As a disciplined religious body, we know that you are the Governor of all the people in Osun State, irrespective of religious or political dichotomy, and thus, we shall not insensitively make any demand on you that will amount to any special favour which may negatively affect the legitimate interest of other religionists.

“Rather, we would urge you to continue to adhere strictly to justice and fairplay for all and sundry in the interest of harmony. We have keenly followed your governing prowess since you assumed office as the Governor of this State and we have seen how conscientious you are in dealing with the affairs of the various Nigerian citizens who reside in Osun State without resorting to media propaganda. Sir, please accept the assurances of our best regards in encouraging your very goodwill of serving the people.”

In his remarks, Oyetola appreciated MUSWEN leadership for being a uniting force for all Muslim communities and smaller Islamic organisations in South West.

The governor who thanked the leadership of the organization for the visit, said that it was worthwhile to know that the group had done impressively well in the onerous task of catering for preserving, protecting, promoting and advancing the interests of Islam and Muslims throughout the length and breadth of the South West region since its establishment 13 years ago.

Oyetola said he would continue to do his best in upholding the constitutional responsibilities ascribed to his office by being fair and just to all regardless of faith, religious, political and tribe affiliations.

“I am conscious of my position as the only Muslim Governor in entire Southern Nigeria and I will always
strive to make Muslims proud of my stewardship as I solicit for your continued support and prayers,” Oyetola added.