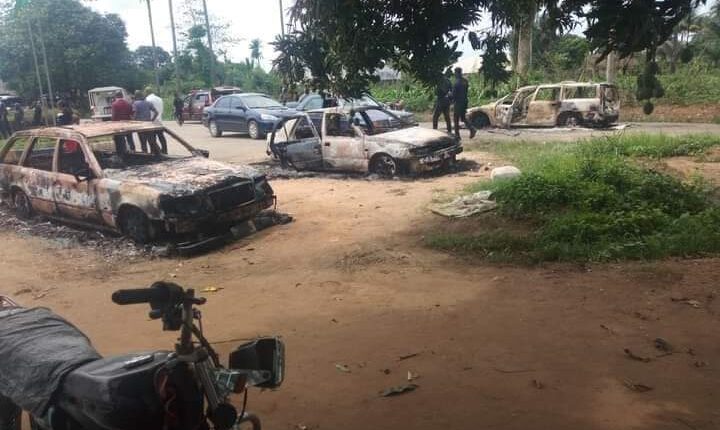 At least two Policemen were said to have been killed and five vehicles set ablaze when members of the Eastern Security Network (ESN) attacked a Police Station in Ibiaku Ntok Okpo, Akwa Ibom State.

Aside from the deceased law enforcement officers, a Policewoman was reported to have sustained gunshot wounds during the attacks in Ikono Local Government Area.

The Guild gathered that the gunmen stormed the police station at about 3 am on Saturday, destroying the flag hoisted within the premises and vandalised several other property before leaving the scene.

Confirming the attacks, the council boss, Nyakno Okoibu, who arrived at the scene minutes after, stated that efforts were ongoing to restore normalcy across the councils.

Okoibu, in a statement by his Chief Press Secretary, Nsisong Ntuk, stated that efforts were ongoing to forestall a reoccurrence, saying, we are already boosting the manpower of the security architecture within the council.

According to him, all necessary apparatus will be activated to ensure that the perpetrators of this heinous crime are apprehended and brought to book.

“Akwa Ibom state has over the years been known as a peaceful state where lives and properties of those domiciled within it are safe and secured. The narrative will not change now.

“All indigenes of the Local Government Area are assured of going about their normal routine without fear of attacks, harassment, and intimidation. The Chairman is on top of the situation and will communicate the next line of action after interacting with the Executive Governor of the State. All indigenes of the Local Government Area are encouraged to up their security antenna and report any suspicious activity to security agents. Also, anyone with useful information on the attack should come forward as there is the assurance of strict confidentiality”.