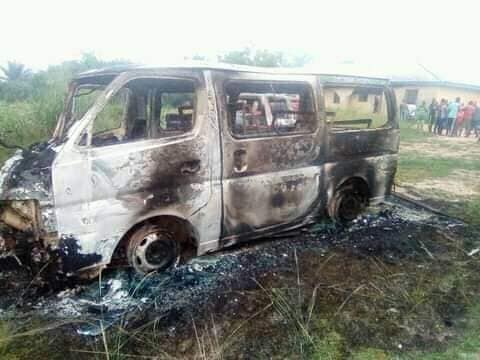 No fewer than five Nigerian Police officers and unidentified women were confirmed to have been killed by members of the proscribed Indigenous People of Biafra (IPOB) during an attack on Odoro Ikpe Police Station in Ini Local Government, Akwa Ibom State.

Aside from the murder law enforcement officers, the gunmen, in their usual style, also set ablaze the police station and patrol vehicles within the premises during an attack that lasted for several hours in the council.

It was learnt that the policemen were killed during an attempt to repel the gunmen that also killed woman e other officers that participated in the exercise.

The attack in the early hours on Saturday came barely 24 hours after the joint military team killed 11 IPOB members that were about to unleash terror on Orlu police station in Imo state.

An eyewitness narrated: “the gunmen who came in two buses and a Sienna car filled with armed men numbering more than 40, arrived Ini Local Government Area with sophisticated weapons broke into the police facility at precisely 2:45 AM, killing five policemen on duty, burning of vehicles while inflicting injuries on others.”

Confirming the attack, the council Chairman of Ini Local Government Area, Israel Idaisin, has condemned in totality the invasion of the alleged members of the IPOB at the Divisional Police headquarters in Odoro Ikpe.

Idaisin, who arrived at the scene with the House member, representing Ini State, constituency, Emmanuel Bassey, said: “I can confirm that gunmen arrived Ini Local Government Area with two buses and one Sienna car on Saturday at 2:45AM numbering more than 40 men, killed 5 policemen on duty and one woman at Odoro Ikpe Police station while burning several vehicles during the attack.
“I want to also extend my heartfelt condolences to the fallen heroes families and the Nigerian Police Force who died in the line of duty. I want to also thank the youths of Ini Local Government Area who were proactive in raising the alarm which was the needed force that helped to reduce the level of casualties that would have been recorded as a result of the attack.
“I urge the good people of Ini LGA to stay calm as we are working with relevant security agencies and the Government of Akwa Ibom State to ensure that the situation is contained and necessary modalities are being put in place to forestall a reoccurrence. There is no cause for fear as the culprits will be brought to book in no distant time”, he added.
In Local Government Area is the fourth police station to be attacked. Essien Udim, Ikono, Ika Divisional Police Stations have all had their share.