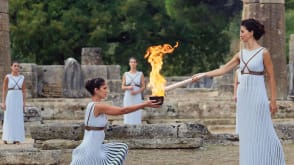 The International Olympic Committee (IOC), as well as the Tokyo Organizing Committee of 2020 Olympic Games, have disclosed that pre-set dates for holding of the international sporting event would be maintained, and have commenced the traditional torch relay race, despite global threat of the novel coronavirus pandemic.

The bodies, in response to worldwide speculation  that the global sports competition should be cancelled due to concerns over possible spread of the deadly disease, insisted that the games would go ahead as planned on July 24 till August 9,  and that adequate preventive proceedures would be put in place ahead  of the sports programmes commencement.

According to the IOC President, Thomas Bach, planning for the 2020 Olympic games had not followed usual route, as significant measures had been put in place to contain and curb spread of the viral infections during the Tokyo games, due to which he said, it was safe to continue as planned, with the program and that the planning committee had the situation under control.

While speaking to a small crowd of invited guests who had come to witness the torch lighting ceremony in ancient Olympia, on Thursday, Bach reiterated that Tokyo 2020 Olympic games was shaping up to be an outstanding event, and expressed belief that due to the installation of all necessary precautionary measures by committees, ahead of the games, threat of coronavirus could not necessitate cancellation of the sporting event.

He expressed appreciation to the Japanese government for its support and cooperation towards making the global event reality even in the face of contraints such as was posed by the viral pandemic, and which had informed need for additional safety and medical preparations towards the olympic event.

“Nineteen weeks before the opening ceremony of the games we are strengthened in our commitment by many organizations around the world taking significant measures to contain the spread of the coronavirus,”

“The Tokyo Games are delivered by an all-star, all-Japan team with outstanding support and cooperation on all levels of government”.

The official explained that Thursday’s torch lighting ceremony was the first, since inception in 1984, to be held without thousands of spectators from all over the world, in a move which was adopted in face of worldwide coronavirus realities, and assured world organisations, countries and participants that the event organisers were not oblivious to threat being posed by the novel virus, but were confident in their ability to manage, curb and contain it during the olympic games event.

The Guild gathered that the scaled -down torch lighting ceremony had in attendance actress, Xanthi Georgiou, who performed role of the high priestess by using a parabolic mirror to ignite the torch, and Greek Olympic shooting champion, Anna Korakaki (first woman to ever launch an Olympic relay) to whom the torch was given, and who ignited torch of the 2004 Olympic marathon champion, Japanese runner, Mizuki Noguchi, who began the race.

It was also gathered that seven-day relay race is expected to be handed over to the games organizers on March 19.

Coronavirus may be over by June -China