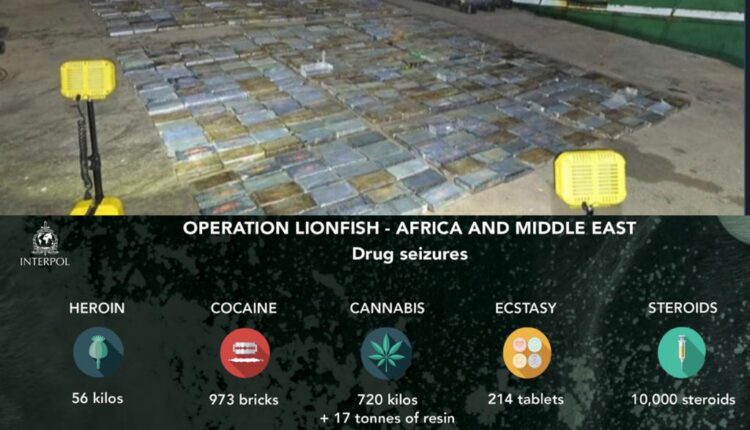 International Police (Interpol) has arrested 287 drug traffickers and it seized illicit drugs with a street value of nearly 100 million euros in operations in Africa and the Middle East, including two major busts that show how traffickers are packing larger loads into their shipments.

As gathered, the agency worked with customs and police officials from 41 countries for two operations in March and April that coordinated enforcement action at borders and other hotspots.

Interpol, in a statement disclosed on its Twitter account, stated that in Niger warehouses, authorities seized 17 tonnes of cannabis resin, worth around 31 million euros ($37 million). The drugs were destined for Libya and it was the largest drug bust in the history of West Africa.

“We are seeing a marked increase in drug traffickers using Libya as a transshipment point, including for drugs from as far as South America,” said Brigadier General Adel Abulkasem Al Sharwy Bentaleb, Head of Libya’s INTERPOL National Central Bureau. “While many of these drugs are neither produced nor consumed here, this has not spared us from the violent crime inevitably wrought by such activity, which we are determined to combat alongside INTERPOL.”

Meanwhile, in South Africa, police seized 973 cocaine bricks worth around 32 million euros from a fishing vessel and arrested 10 people, Interpol said. It was also one of South Africa’s largest drug busts.

Interpol added that more than 4.5 million tablets of Tramadol, a powerful opioid diverted from its medical purpose, 10,000 steroids, and 200 kilos of amphetamines were recovered during the operation. Police also found living pangolins, vehicles, rough diamonds and contraband cigarettes.

“The striking results of these two operations demonstrate the sheer scale of the trade in illicit drugs and its international nature,” said Jürgen Stock, Secretary-General of Interpol.

“Drug trafficking is a threat that we collectively face and the massive seizures achieved in Operation Lionfish show what is possible when law enforcement fights back together,” added Secretary General Stock.

Africa has recorded many record busts in recent years and is seen as a transit route for illegal drugs from South America to Europe.