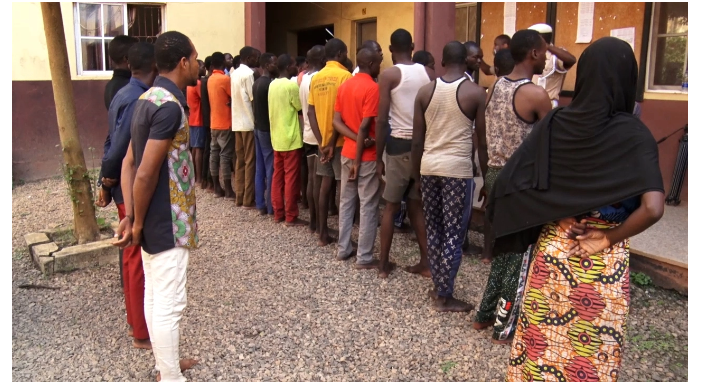 No fewer than 33 Chadian and Togolese have been arrested by the Nigeria Immigration Service (NIS) for gaining access into the country illegally in Ogun State.

The suspects, who were arrested from two locations in the Odeda Local Government Area of the state, were discovered do not have valid documents displaying their identities including date of arrival and others details.

Parading the suspects at the command’s office along the Presidential Boulverd in the state capital, the state Controller of Immigration, Yakubu Jibrin, said that they were arrested after a thorough investigations that confirmed their illegal activities and no means of livelihood.

While asking members of the general public to be more vigilant, especially in face of the current security situation in the country, he, however, promised that the suspects are to be repatriated back to their countries of origin after due consultations with their countries.

He said, “After receiving that information on the 7th of November I decided to send my people there for surveillance which they did for some days to confirm that information, and luckily for us on Wednesday, we struck the two locations that were assumed to be occupied by these people and we were able to apprehend 33 of them, we brought them here to this Command and we have started profiling them.

“After profiling them, we discovered that out of 33 of the, 32 are Chadian nationals while only one of them is a Togolese.  We tried to find out why these people are here and also from the same country and they told us that they were invited to do networking business. We tried to see the type of product this Togolese whom they claimed recruited them for business does and to be frank he cannot show us anything.”