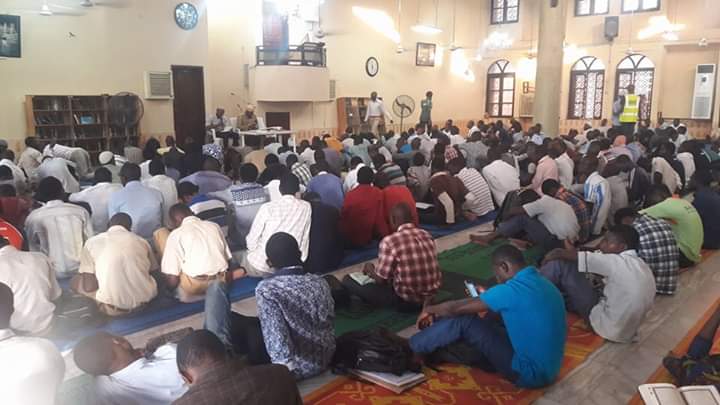 Following the coronavirus induced lockdown and a subsequent government ban placed on social and religious gatherings, the Chief Imam of the Lekki Central Mosque, Lagos State, Shaykh Ridwan Jamiu, has urged Muslim faithful on the need to observe their I’tikaf in their various homes.

Iʿtikāf is an Islamic practice consisting of a period of staying in a mosque for a certain number of days, devoting oneself to ibadah (acts of worship) during these days, and staying away from worldly affairs. It is mostly observed by Muslims in various central mosques during the last ten days of Ramadan (Islamic fasting) to seek the night of Majesty described in the Qur’an chapter 97.

But, considering the present realities, the Muslim cleric who warned the faithful not to consider engaging in any form of gathering to observe this year I’tikaf, noted that it is binding of Muslims to respect the law of the land and the people in power or authorities after respecting the Almighty and the Prophets.

Jamiu, while speaking to newsmen on Thursday clarified that since the global pandemic has put a sudden halt to the way of life as we used to know it, it is pertinent on Muslims to act according to the present realities by being law-abiding and not flout the state government directive on religious gatherings which had necessitated the closure of mosques since the outbreak of the deadly respiratory disease.

Explaining ways in which Muslims can still observe I’tikaf without contravening the laws or engaging in acts of worship that could enhance community spread of coronavirus, the Iman advised Muslims to find a secluded place in their various homes and restrict themselves by engaging in the same practice which they would do as though they are in various mosques.

According to him, the observance of I’tikaf at home is permissible under the principle of necessity in the face of difficulty (Darurat wa mashaqa) as contained in the Shariah, adding that I’tikaf at home as a necessity is covered by Qur’an in chapter 64 verse 16 where Allah says “Therefore fear Allah as much as you can”.

Jamiu, however, explained that though the practice may look strange to Muslims who are used to observing their I’tikaf in mosques, adding that a similar thing happened in the time of Prophet Moses (peace be upon him) when the children of Israel were commanded by Allah to pray at home because of Pharaoh’s threat, as reported in Qur’an chapter 10, verse 87.